Travel: Exploring Madeira by sidecar: an exhilarating introduction to the island – By Julie Dawn Fox 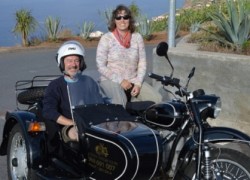 I finally made it to Madeira for the first time in August. As usual, my list of places to visit was ambitious, especially since Mike and I had decided not to hire a car. We thought we’d leave the hairpin bends to the experts like Filipe Freitas from Madeira Sidecar Tours who offered to take us on a tour of the East side of the island. Thanks to him, we saw more than we’d bargained for and felt like mini celebrities as people gawped and took photos of us and our stylish black motorbike and sidecar. It’s not surprising that people stare. There are currently only three of these 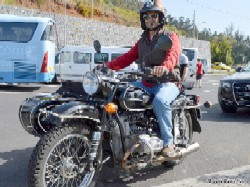 replica Russian military bikes on the island so they are still very much a novelty.

Filipe stuck to the old roads wherever possible on our adventure. Although the new roads and tunnels are a vitally important addition to the island’s infrastructure, they’re not so much fun on a motorbike or sidecar. Pootling along narrow windy roads through villages and around mountains taking in the spectacular scenery is exhilarating. We were able to relax and enjoy the sense of openness and freedom while chatting about snippets of local history and oddities via the headphones and microphones in the helmets.

Our first stop was the Pico da Torre viewpoint overlooking the fishing village of Câmara de Lobos. As we drove away from Funchal, the patches of greenery start to spread, although I was surprised by the amount of dried vegetation. For some reason, I’d expected that even in August, Madeira would be green all over. As the day progressed, we discovered several microclimates that proved me well and truly wrong.

The south of the island gets the most sun, which is great for growing tropical fruits such as bananas. Sadly, although it seems as though every other house has its own plantation, Madeiran bananas are too expensive for the local population to buy. Steep slopes equal high labor costs and it’s cheaper to import them from Ecuador and the like, even if they aren’t as tasty. We never got to sample a local banana on this trip but I’ll be telling you about the food and drink we did enjoy in a later post.

As we climbed further uphill, the banana plants were gradually replaced by Malvasia grape vines which form low jungly canopies over every spare patch of ground. This helps the heat from the earth to heat the grapes and improve the flavor but again, it makes harvesting tricky, which is partly why Madeira wine is relatively expensive.

A glass-floored viewing platform extends from the Cabo Girão clifftop, 589 metres above sea level, provoking squeals and plenty of photo opps from the hundreds of tourists that come here each day. The views are stunning and the sensation of looking down at the sea far, far below is a little disconcerting so I was happy to relinquish my spot to others and get back on the bike.

We returned to Cabo Girão on Sunday, albeit unintentionally and without Filipe. If you have more time to spend in this area, the views from Restaurant Miradouro Cruz da Caldeira are spectacular and they do a mean steak sandwich (prego especial). It’s possible to walk downhill along Caminho de Cruz da Caldeira and Vereda de Levada da Caldeira to the Fajã de Cabo Girão cable car but be warned, it’s extremely steep in parts. The path zig zags past vegetable plots and rural houses and although the views are impressive, the route isn’t always pretty. If you don’t fancy the descent, Rodoeste bus #27 stops near the cable car and nearby Restaurant Teleférico do Rancho which also has excellent views, great ice cream and mixed grills.

Mike and I took the cable car down the cliff to the tiny patch of farmland that backs a pebble beach (5 euros return journey). This bay is a popular swimming spot for the catamarans and boat trips that anchor to allow their passengers to go for a dip before returning to Funchal. Approaching the water from the beach is a bit trickier as you have to pick your way across mounds of loose pebbles. I learned the hard way that it’s easier with shoes on.

This sprawling town is built in a river bed and is still recovering from the devastating floods that killed around 50 people and destroyed many homes and businesses in 2010. Although we only had time to stop for a coffee, Ribeira Brava seems pleasant and has a small grey sandy beach beyond the esplanade which I imagine is much easier to deal with than the pebbled beaches. 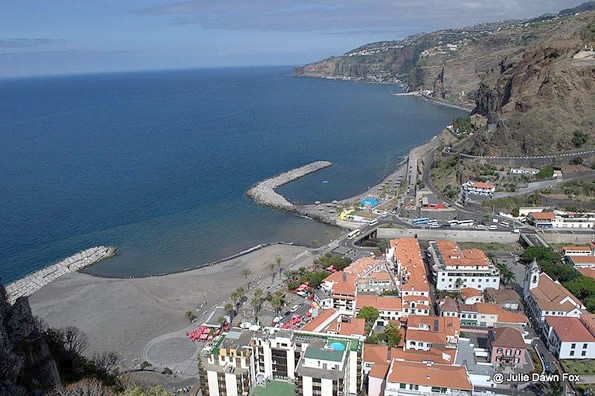 From Ribeira Brava, we cut across the island towards the north coast. As we drove up through the Serra de Agua, I was captivated by the jagged peaks and impossibly located patches of farmland. The descent to São Vicente took us through Madeira’s famous Laurel Forest into greener, sub-tropical territory and the lush vegetation that my mind had associated with Madeira. We took time out from the tour to explore the inside of the island at São Vicente caves, a fascinating experience that I’m planning to share with you in another post. We only managed a quick peek at the small but attractive coastal village of São Vicente but we noticed a few cafés and restaurants and I could easily while away a few hours or more here. 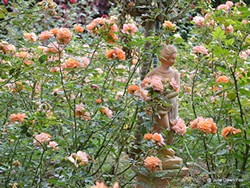 Sculpture in a rose garden

Instead, I climbed back into the sidecar so that Filipe could drive us through hand-carved tunnels to Arco de São Jorge, a spot that English settlers immediately fell in love with. I can see why. The semi-circular stretch of flat land is backed by a horseshoe cliff that looms large and green. Within this patch of paradise you’ll find Quinta do Arco, and the 1,700 species of roses which are cultivated in its gardens. For 3.50 euros, we got to wander along the leafy paths, past attractive self-catering bungalows to the rose garden.

Apart from an amusement park, Santana is best known to tourists for its triangular thatched roofed houses. Nowadays, hardly anyone actually lives in this type of property; they’re tiny. The ones that visitors will see have been spruced up and painted to make them as photogenic as possible and at least one now houses a souvenir shop. I’m very glad we didn’t spend hours on a bus just to see these cottages. A quick photo stop is all we needed.

After the greenery of northern Madeira, it came as something of a shock when we reached the desert-like landscape around the free-trading zone and fishing port of Caniçal and the magnificent rocky peninsular that leads to Ponta de São Lourenço. The rock formations are alien and it came as no surprise when Filipe told us the area has been used as the set for sci-fi films.

From one side, you can see the three Ilhas Desertas (desert islands) which are uninhabited and protected for their fauna and flora. You can take a boat trip to them if you’re interested. From the other side of the peninsula, the larger island of Porto Santo is also visible. If endless sandy beaches are your thing, you might want to consider taking the ferry across.

Personally, I’d rather stick to the main island and if I get the chance to go back to Ponta de São Lourenço, I’ll do the 2-hour walk along the headland then go for a dip in the ocean before retracing my steps. There’s a bus stop and a car park at the start of the walk.

Machico from Pico do Facho, Madeira

Our last stop before returning to Funchal was Machico, the first settlement in Madeira. From the Pico do Facho viewpoint, you can see the city spreading away from its golden sandy beach along the valley into the hills. Up close, the seafront promenade was still getting plenty of use in the early evening and although I didn’t find time to return on this trip, I’d like to spend a little more time getting to know Funchal’s biggest rival.

Exploring Madeira by motorbike and sidecar was a great way of getting a sense of the island’s diversity and an idea of which places are worth going back to explore in more depth. Because of the individual nature of the tours, it’s easy to customize itineraries if you have specific interests and to build in time for visiting attractions. For example, we ended up doing the East of Madeira tour in reverse so that we could have time to explore the caves at São Vicente.

The only downside to this, I discovered, was that the view from the sidecar was slightly restricted by being next to walls and hillsides for much of the time. Normally, this wouldn’t happen as the routes are designed so that the sidecar passenger spends most of the journey on the outer side of the road with heart-stopping views down deep valleys. Mike and I found that the views from the back of the bike were better and the sidecar was more comfortable so we took it in turns to relax in the sidecar and perch on the bike.

For more information, visit the Madeira Sidecar Tours website or watch this video, which starts at Ponta de São Lourenço.