Travel: Why the Serra da Estrela is the star of central Portugal – By Julie Dawn Fox 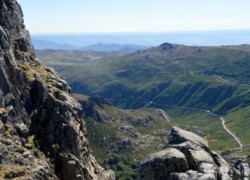 The muted clanging of sheep and goat bells drifts up from the valley to where I’m standing. Coupled with the pure mountain air and magnificent views of rocky ridges and distant plains, it’s idyllic indeed. So lovely that I’m kicking myself for putting off exploring the Serra da Estrela for so long. Until my recent 3-day trip there, I’ve done little more than pass through the dramatic landscape on my way elsewhere.

What a fool I’ve been!

This magnificent mountain range in central Portugal is only 1 1/2 hours away from where I live and it’s spectacular. Not only is it named after the mainland’s highest peak, Star Mountain, it’s also the largest protected area in the country and Portugal’s only ski resort. Not being a fan of the cold or getting stuck on icy roads, I have no particular desire to drive up there in the winter. On a clear sunny day, however, I’ll happily go back for more.

Walking in the wilderness

My base for this trip was Penhas da Saúde (Crags of Health) where the fresh mountain air was found to be beneficial for people suffering from tuberculosis. A motley collection of houses, hotels and cafés mars the natural beauty of the landscape mildly but you only need to walk a short distance to be well away from man made structures. 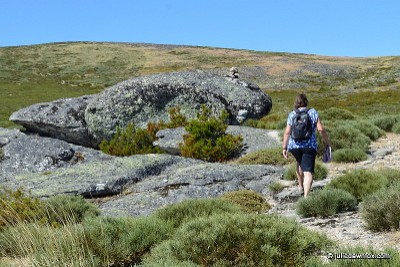 Sadly, walking in the Serra da Estrela is still a rather hit and miss affair. The Visit Portugal website claims that there are 375 km of marked trails but I challenge you to track them down and follow a whole one from start to finish.

My friend and I set off confidently from our hotel, map in hand, intending to walk the Senda dos Pastores (Shepherd’s Path). It wasn’t long before we started to wonder how useful the route leaflet would prove to be. Unable to find a single signpost, we spotted a man filling containers at a spring water tap and asked him for directions to the reservoir. From there, we were very much on our own with no obvious track to follow. Using the fake lake and the distant road as landmarks, we picked out our own path through the low bushes and piles of boulders, heading for the ridge that was apparent both on paper and ahead of us. 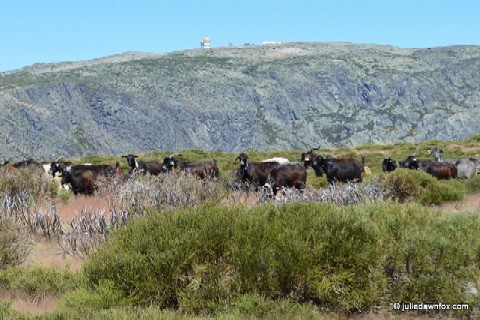 Goats grazing at the top of Serra da Estrela. In the background is the “Torre”, the highest point in Portugal.

We must have ended up on the right path somehow because we began to notice piles of small rocks placed on top of the larger stones. These cairns are the traditional way markers used by shepherds and by keeping an eye out for more we gradually progressed uphill. After an hour or so, a Land Rover came trundling along just ahead of us. Once we’d found and started to follow the dirt track it had used, we were on easier if somewhat surreal terrain. By this altitude, the rocks had all but disappeared and we found ourselves walking through peach-colored clouds of vegetation towards a herd of black and brown goats.

They were mooching along the ridge of the slope we’d just climbed and I was keen get around them to see the view of the other valley. The gigantic Serra da Estrela sheepdog protecting the herd had other ideas. It left its charges to bark us a warning and glared menacingly as we beat a hasty retreat, only rejoining the goats once it was satisfied that we had taken the hint.

At that point, having lost sight of the walking trail, we decided to head back to the hotel rather than try to find the remainder of the circular route. Instead, we made our own circuit by heading for the tarmac via the Centro de Limpeza de Neve (Snow Clearing Centre) and walking the final 3 km along the road.

It was only when we were checking out of the hotel the following day that I noticed the small poster in reception offering guided walks in the area. Apparently they were free, too! If you’re not planning to stay overnight but want a walk in this part of the Serra da Estrela, this hike from Penhas da Saude to Torre on Wikiloc might be of interest although I haven’t tried it. Here are some other walks in the area, also from Wikiloc.

Although the landscape varies considerably within the Serra da Estrela, there’s no escaping the mounds of rounded granite boulders that litter it. Much like cloud formations, only more permanent, some of these clusters resemble animals or humans. One of the most famous is the Cabeça do Velho (Old Man’s Head) on the N232 between the villages of Gouveia and Manteigas.

Once you start the descent into Manteigas, however, the road meanders through mature pine forest before reaching the glacial valley in which the village sits. Having already visited the Burel factory, my intention for this visit was to explore Manteigas on foot, especially as we had a pack of colourful leaflets with a map and photos of each walk plus an overall map of nearby trails. It was only when we tried to do the Village Route that we discovered how useless they are.

After checking with a local, we identified St Mary’s church and located ourselves on the trail marked on the leaflet but there were no markers in the street to indicate where we should go next. We picked a street at random and wandered around aimlessly until we stumbled across the stream. Not only did it have a path running alongside it, there were also the elusive red and yellow strips that indicated we were on the correct path. We followed the pretty track along the watercourse for a while but we simply couldn’t work out where we were on paper so we drove off in search of a waterfall.

In English, this means Hell’s Well, which is a strange name for such a pretty spot. I’m sure it’s much scarier in winter when the full force of the waterfall is surging through the rocks but in summer there’s barely a trickle pouring into the pool of clear water. Just make sure you’re wearing non-slip shoes because you’ll need to negotiate some awkward steps around the rocks to get to a rickety wooden bridge to fully appreciate the waterfall.

There is, in theory, another walk that incorporates Poço do Inferno but either I’m simply incompetent when it comes to using these leaflets or they just aren’t as practical as they need to be. Whatever the case, we got a bit lost, scrambled through a forest and made it back to the car in one piece. Eventually.

You might be better off, especially if you like the idea of doing a walk over more than a day, going with a company like Trilhos de Ideias. Their website is in Portuguese and I haven’t met the owners or gone on their treks but I am fairly certain that they will speak some English and they seem to know what they’re doing. 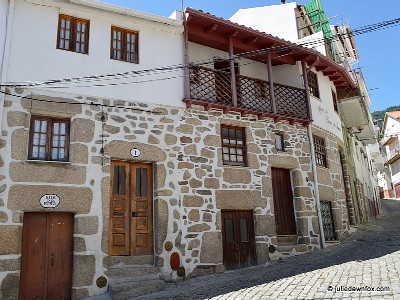 You could also check the Visit Centro website for more information or the Serra da Estrela Facebook page for upcoming events including festivals and group walks (in Portuguese).

Check out my other post about Loriga and it’s lovely river beach.

Where to stay in the Serra da Estrela

You’ll find the whole gamut of accommodation from campsites and youth hostels to luxury hotels so you should be able to find something that suits your tastes and budget. This is what a quick search of Booking.com turns up for the area.

I’ve stayed at Casa das Penhas Douradas near Manteigas which I would happily recommend. It’s run by the same people responsible for reviving Burel, the traditional woollen material that’s recently become fashionable. You’ll see plenty of examples of Burel in its many colours and applications in the stylish design hotel that fits in well with its surroundings. It also has a heated indoor pool and a lovely spa. You can hire bikes and they provide free kayaks for use at the nearby lake plus information about local walks.

If you’re less fussy about sympathetic architecture, the yellow and black Hotel Serra da Estrela in Penhas da Saúde may look quite garish but it’s a reasonably comfortable and clean base and the 14 euro buffet in the medieval-styled restaurant is good value for money. As an added bonus, I got to eat delicious Serra da Estrela cheese for breakfast and dinner! They offer a spa and chalets but I haven’t checked either of them out. When I stayed, they were also advertising free guided walks so ask for more information if you’re interested.

Public transport is limited and may be non-existent at the weekend so you’re much better off exploring with a car, if possible.