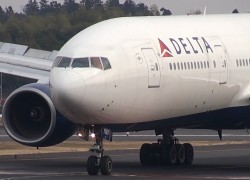 Delta Airlines has announced more options for costumers travelling between the United States and Europe including flights to Ponta Delgada and Lisbon.

Delta, the leading airline flying across the Atlantic with more total departures, destinations and seats than any other airline, will start offering New York-JFK to Ponta Delgada-Azores next year, beginning May 24 – flight number DL17, departure JFK 8:30pm, arrival Ponta Delgada 7:00am (next day) – five times a week, except on Monday and Wednesday.

The new route, departing from Lisbon and landing at Hartsfield Jackson International Airport in Atlanta, will complement the flight to New York that was launched this year.

The seasonal route between the Azores and New York will be operated five times a week, linking the island of São Miguel to more than 80 destinations.

In a statement, Delta Airlines’ transatlantic vice president, Dwight James, said that the route between Lisbon and the United States has been successful, so the airline is increasing the Portuguese network to respond to the demand for travel in the summer months.

Dwight James added that while boosting inbound tourism, “flights will bring more opportunities for trade between Portugal and the US – the country that is the largest trading partner outside the European Union.”

For the Lisbon route, Delta has scheduled a Boeing 767-300ER, which has a capacity of 225 seats, while for flights between Ponta Delgada and New York will use a Boeing 757-200ER, which carries 199 passengers.

In a recent development, United Airlines has just announced a number of new seasonal flights between the United States and Europe for the coming year. The new routes include service from Newark, New Jersey, to Porto, Portugal.

SATA/Azores Airlines has also launched a twice-weekly (Wednesdays and Saturdays) operation between Boston Logan Airport and Barcelona in Spain and from Ponta Delgada and Boston to the city of Praia, the capital of Cape Verde.