Travel: Azores among the most beautiful places in the world to visit – National Geographic 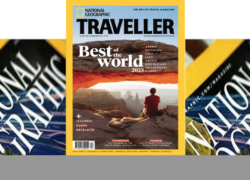 The Azores archipelago comes among the “Best of the World” categories listing the 25 most beautiful, must-visit places in 2023, according to the December edition of National Geographic Traveler magazine.

This is the second time the Azores are awarded this distinction. In 2016, the Azores was among best places in the world to visit, as part of National Geographic’s lists of must-visit tourism destinations.

Of note that the National Geographic has introduced a new category in this year’s list, replacing “sustainability” with a broader “community” category.

Therefore, nature, community, culture, family and adventure are the five categories selected for 2023. The Azores are part of the nature category, gaining prominence for its sustainability programs.

The hope is that 2023 will be not just a big return to travel but also to rediscovering wonder, according to Amy Alipio, senior editor for National Geographic Traveler.

“Because when you are awed by something, you treat it with respect. And that spirit is something we want to encourage with this list,” Alipio said.

According to National Geographic editors, this year’s list focuses on destinations that have community-led conservation efforts, healing and heritage journeys and ways for travelers to give back as well as places that are doing important work in ecotourism, sustainability, and inclusive travel.

The Azores islands are also a must-visit for its biodiversity and for the much to do and to observe while there. Visitors can enjoy the richness and beauty of natural landscape, observe the whales in their natural habitat, dive into the Atlantic waters, scroll through the nine islands by foot or by horse, do sport fishing and even go paragliding. Canoeing, surf, and golf are other sporting activities available.

At the top of the list of the 25 must-see places in 2023 are also Batswana, Italy, Laos, Mexico, New Zealand, and the United States. Alberta, Canada also makes the list.

For three consecutive years, the Azores have been considered the “Best Adventure Tourism Destination in Europe”, by the Word Travel Awards, in addition to being the first and only archipelago in the world with the certification of “Sustainable Tourist Destination.”