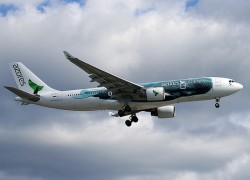 To meet the growing demand, SATA/Azores Airlines intends to expand its service in Canada, projecting to increase its operations by 21% this year, transporting around 128,000 passengers between Canada the Azores and mainland Portugal.

“For 2017, the Azores Airlines plans to operate 40 more flights between Canada and Portugal, in addition to introducing a larger capacity aircraft – the A-330 replacing the A-310 – which translates into a significant growth,” said Carlos Botelho from Azores Airlines.

SATA/Azores Airlines has been serving Canada for 30 years connecting Canada and Portugal through a daily flight from Toronto and Montreal to Ponta Delgada and Terceira, in the Azores, in addition to Porto and Lisbon in mainland Portugal.

The aim is to meet the growing demand by Canadians who choose mainland Portugal and the Azores as a tourism destination. An estimated 500,000 Portuguese nationals and Canadians of Portuguese descendants live in Canada (2011 census), the vast majority in the province of Ontario.