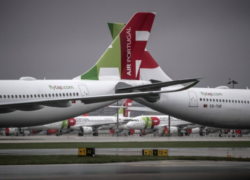 The announcement came after the SPNVAC failed to reach an agreement with employers over cuts on salaries and working conditions.

The action will force TAP to cancel most of its domestic and international flights for the duration of the strike, except for services to the Azores and Madeira which will be operated fully.

The crew workers stoppage will result in the cancellation of 1,316 flights and generate a negative impact of 48 million euros, TAP has stated.

Travelers are advised to seek alternative flights, check with the airline directly or with travel agents, to confirm the status of flights, as strikes can be announced or called off at short notice.

TAP usually flies 300 flights a day. The December two-day action strike would have cost TAP around 8 million euros ($8.60 million) in revenue, it was reported.

Following the December stoppage, negotiations between TAP and SNPVAC continued, with TAP presenting a new proposal to the crew, which was not enough to prevent the January strike.

As a result, TAP and its crew did not agree on the revision of the Company Agreement, which has been in force for almost two decades, since 2006,

TAP says it “regrets” the decision of the crew workers going on strike and stated that it will continue “to do everything possible to reach an agreement” to avoid the stoppage.

Portugal’s state-owned air carrier, is under an EU-approved 3.2-billion-euro bailout plan, which includes the downsizing of its fleet, the cutting of more than 2,900 jobs and the reduction of most workers’ wages by up to 25% in wages above 1,410 euros per month.