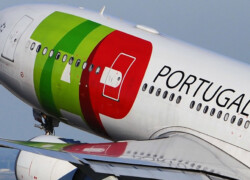 The action will result in a cancellation of 360 flights during the stoppage period. TAP usually flies around 300 flights a day.

The TAP strike period may offer minimal services to eleven destinations to include the island regions of the Azores and Madeira, and scheduled  flights to Brazil,  Angola, Cape Verde, Mozambique and Guinea-Bissau.

According to SNPVAC, more walkouts are already schedule for later, to five more days in January 2023, on dates to be announced.

The strike notice was first announced in the beginning of November, in response to a proposed new work contract by the carrier.

According to the notice, the workers demand the replacement of lost salaries and benefits resulting from the current company’s restructuring,

The notice also vindicated the “lack of respect that TAP has shown towards the crew” and the “more than questionable management decisions that end up having a direct and indirect impact” on the lives of its workers.

Workers feel marginalized in the context of TAP’s restructuring plan and demand compensation for the sacrifices made during the last two years, resulting in profits for TAP “at the expense of the crew workers.”

“We want an end to the financial constraints to which workers are being subjected. The 25% salary cut we suffered due to the company’s restructuring plan is unacceptable, especially given current inflation levels,” SNPVAC head Ricardo Penarroias told Reuters on Tuesday.

SNPVAC president Ricardo Penarroias accused TAP hierarchy of not having shown “any willingness to engage in dialogue, to resolve the dispute,” Lusa reported.

“The company unilaterally decided to end negotiations, and the union was always available to negotiate,” he said.

According to Lusa, the strike will affected around 50,000 passengers, causing “a loss of €8 million in revenue.”

TAP has advised all affected passengers to reschedule their flights without any penalties..

The workers’ action followed TAP disclosing its third quarter returns, in November, showing profits of € 111 million (USD$110 million) between July and September 2022, a net profit against a loss of €134.5 million reported the past year.

The Portuguese air carrier,  which is 72.5% state owned, is in the process of privatization while restructuring its operations under a Brussels-approved € 3.2-billion rescue plan.

The restructuring includes downsizing its fleet, cutting about 2,900 jobs and reducing wages of most workers by 25%.