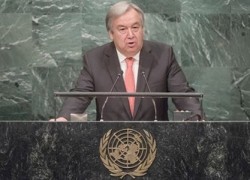 António Guterres begins his five-year term of office on January 1, 2017. He was sworn in by Peter Thompson, president of the 71st. session of the UN General Assembly.

The ceremony took place this morning at the United Nations headquarters, before representatives of the 193 member states, preceded by a tribute to outgoing Secretary-General Ban Ki-moon, who made his last speech as Secretary-General to the plenary. 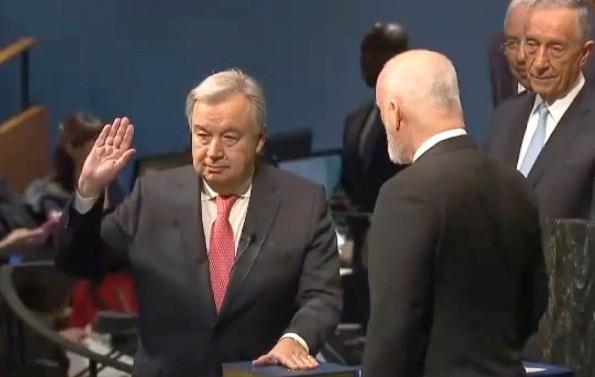 Antonio Guterres was sworn in by Peter Thompson, president of the 71st. session of the UN General Assembly. In the background are the President of Portugal, Marcelo Rebelo de Sousa and Portuguese Prime Minister Antonio Costa.

In his inaugural address as the newly elected UN Secretary-General, António Guterres remarked, “Our most serious shortcoming — and here I refer to the entire international community – is our inability to prevent crises.  The United Nations was born from war.  Today, we must be here for peace.” And he added, “Our duty to the peoples we serve is to work together to move from fear of each other, to trust in each other.  Trust in the values that bind us and trust in the institutions that serve and protect us,’ and he stressed, “My contribution to the United Nations will be aimed at inspiring that trust, as I do my best to serve our common humanity. “

Throughout his long career as a public servant, Guterres has been a strong defender of humanitarian values. As UN High Commissioner for Refugees (2005-2015) he has fought for the values enshrined in the UN Charter such as peace, justice, respect, human rights, tolerance and solidarity, including gender parity and embracing all religions, as he strived to bring those values collectively in everyday life.

Guterres expects to accomplish many goals. He said, “By the end of my mandate, we should reach full gender parity at the Under-Secretary-General and Assistant Secretary-General levels, including special representatives and special envoys.  We need a clear road map with benchmarks and time frames to achieve parity across the system, well before the target year of 2030.  And the same concern applies to regional diversity.”

He closed his remakes by saying, “The threats to these values are most often based on fear. Our duty to the peoples we serve is to work together to move from fear of each other, to trust in each other. Trust in the values that bind us, and trust in the institutions that serve and protect us”.

On October 6, the 193-member General Assembly nominated António Guterres “by acclamation” for the five-year term post of the international organization. He will be the first former head of government to lead the Security Council, replacing Ban Ki-moon, 72, of South Korea who will step down after completing two consecutive five-year terms.

António de Oliveira Guterres, 67, who will be the ninth secretary-general in the 71-year history of the United Nations, is a career politician who also served as president of the European Council (2000) and president of the Socialist International (1999-2005). As UN High Commissioner (2005-2015), he headed one of the world’s largest humanitarian organizations with a budget over USD $6.8 billion (2015) and more than 9,000 staff, working in 123 countries, providing assistance to over 46 million displaced people worldwide. A charismatic orator he is fluent in three of the U.N.’s official languages (English, French and Spanish) in addition to Portuguese. The UN Secretary-General is charged with promoting sustainable development, working for peace around the globe, protecting human rights and dealing with humanitarian catastrophes. António Guterres will serve well as the next world top diplomat.