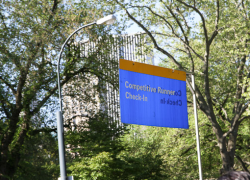 By Carolina Matos, Editor — For the first time, the Portuguese American resident community in New York City is celebrating the Day of Portugal — a day dedicate to honor the Portuguese Heritage and boast ethnic pride – with a race event taking place on Sunday, June 19, at the Central Park.

The Day of Portugal celebration is an initiative of the Portuguese Circle, representing the New York Portuguese resident community, in partnership with the New York Road Runners (NYRR), a local entity that organizes many running events in New York City.

According to João Francisco, co-organizer with Domitila dos Santos, more than 7,000 runners are expected to participate in the Day of Portugal celebration race.  He said, “This is an international event.  About 50 runners are coming from Portugal and some are coming from different parts of the world.”

The running event consists of a 5 mile race for adults (8Km) and a children’s race for runners ages 2 to 12.  He said, “People can still enroll by going to the NYRR website where they can find the information.”

The organizers are very pleased that so many participants have enrolled and that the event is going to be a success.  João Francisco said, “This is the first time in recent years that such an event is taking place in New York City to celebrate Day of Portugal. We are so thankful to the many members of the Portuguese community who have supported us organizing the event and are participating in the activities. We also want to thank the many sponsors that have supported us. Without them this would not have been possible.”

Participating runners will compete for prizes including trips, hotel stays and entries to running events in Portugal.  A festival will follow featuring products from Portugal, Portuguese food and Portuguese music including a Portuguese folkdance performance, fado singers and other performers.

The event will also feature some of the best that Portugal has to offer by providing tourism information and samples of Portuguese brands and products to participating  New York residents as well as foreigners visiting the City at this time of the year.

João Francisco told the Portuguese American Journal that the organizers are looking for more volunteers to help throughout the event.  He said, “We need about 150 volunteers.  At this point we have already 40 enrolled. The tasks involve distributing food samples, holding signs around the race course and answering questions to visitors inquiring about Portugal or the event.”  He also said that those interested in volunteering should contact the Portuguese Circle website. Volunteers receive a t-shirt of the event and will have the chance to win prizes.

João Francisco said that next year’s race is already scheduled for June 17.  He added, “We are already looking for sponsors to support the Day of Portugal next year. We are hopeful that those who have supported us this year will support us again in the future so that we can continue celebrating the Day of Portugal in New York City.”

According to the calendar, the Day of Portugal is celebrated every year on June 10, in Portugal and in the Portuguese communities around the world.  It is a day to boast ethnic pride, and honor the Portuguese Heritage, Language and Culture.

The Portuguese Circle is a non-profit group of Portuguese living in New York City, whose objective is to promote the Portuguese culture by providing social networking venues and promoting cultural events.

The New York Road Runners (NYRR), headquartered in New York City, is dedicated to advancing the sport of running, enhancing health and fitness. Races and other events organized by the NYRR draw more than 300,000 people each year.  The ING New York City Marathon, NYRR’s premier event, is the largest and most inclusive marathon in the world, attracting the world’s top professional runners every year and raising $30.8 million for charity in 2010.