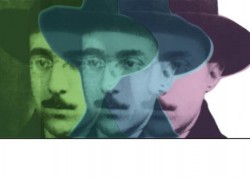 Using its audience as material, the immersive performance  is part of the IATI Theater’s 2013 Performing Arts Marathon event. Scientist Kati Zenith and her husband Richard Zenith, Fernando Pessoa’s English translator, will interact with the audience.

Casa de Pessoa was first produced as part of Yinzerspielen’s “apartment plays series” in August 2012, by a team of international performs, writers and directors, headed by Patrick Berger and Cory Tamler (Yinzerspielen ). The performance has been since recreated for the new space with a new ensemble of performers.

A Portuguese poet, Fernando Pessoa (1888-1935) is one of the most significant literary figures of the 20th century.  Considered one of the greatest modernists in any language, he wrote in Portuguese and English under a number of heteronyms – imaginary literary alter egos – with individual identities complete with distinct biographies, occupations, lifestyles and dissimilar literary tastes and styles.