The lawyer for Kate and Gerry McCann has filed an appeal in Portugal’s Supreme Court following last month’s Appellate Court decision in favor of Gonçalo Amaral.

This is the latest move in the long-running civil action over the former lead detective’s controversial book about Madeleine McCann’s disappearance in 2007.

The court last month overturned an earlier decision to award half a million euros in damages to the McCanns. The Supreme Court review is expected to focus mainly on legal aspects of the case rather than material issues.

The lifting of both the damages ruling and the ban on further publication of the book was seen as a highly significant decision within traditional areas of conflict: the right to honor and privacy on the one hand, and to freedom of expression and opinion on the other.

Freedom of expression is a fundamental right enshrined in the Portuguese constitution that applies to every citizen, but it comes with certain constraints.

The media have the right – indeed it is their social function – to spread news and give critical or non-critical opinions. It is important that they do so with respect for the truth and for the intangible rights of others, said the three appeal judges in this case last month.

Amaral in his book, The Truth of the Lie, not only included facts that were evidence in the inquiry into the disappearance of Madeleine McCann, but aired his opinion that Madeleine was not abducted. He suggested that she died accidentally and that her parents covered this up by concealing her body and making up a false story.

The facts of the case in the form of evidence in police files had already been widely published in newspapers and on the Internet as a result of an initiative by the office of Portugal’s prosecutor general. Amaral had the legitimate right to describe and interpret these facts.

The allegation expressed in his book that the McCanns were involved in a cover-up was not new either. It was already in the public domain as it was contained in the police files and was the basis upon which the couple had been declared official suspects, arguidos, in the original investigation.

The judges indicated that the McCanns had voluntarily limited their rights to privacy by making themselves available to the national and international media to which they had easy access. In effect they opened the way for anyone to debate and express opinions about the case, including opinions that contradicted their own.

In essence, the appeal judges ruled that the McCanns’ rights had not been infringed and that Amaral’s book was a lawful example of freedom of expression. 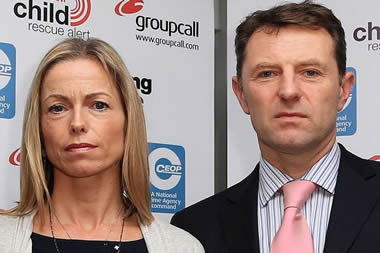 Many observers would argue that the lawsuit instigated by the McCanns seven years ago is turning out to be more harmful and costly to them than the defendants. It has inadvertently generated publicity of a kind they least wanted and boosted book sales, but they have instructed their Lisbon lawyer, Isabel Duarte, to continue to the highest level.

Even that may not be the end of this dispute. Amaral is considering turning tables and suing the McCanns for damages.