The Week: Money, money, and more money… – By Len Port 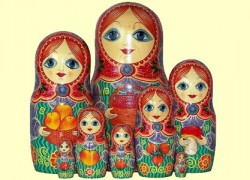 This week’s revelations about the money laundering activities of Russian gangsters in Portuguese and other European football circles come just days before an avalanche of new information is published from the leaked Panama Papers.

The Russian racket in Portugal was uncovered by the Polícia Judiária (PJ) with the support of Europol in an operation codenamed ‘Matrioskas,’ the name for traditional Russian wooden dolls of different sizes that fit inside one another.

Raids on various clubs and homes in Portugal this week involving more than 70 officers culminated in the arrest of Alexander Tolstikov, the supposed owner of the third division club União de Leiria. He is suspected of tax fraud, criminal association, money laundering, corruption and forgery of documents. An administrator and the financial director of the club were also arrested.

União de Leiria, formerly a respectable Premier Liga club managed by José Marinho, dropped to the third division in 2012 and went bankrupt before being bought by Mr Tolstikov and associates last year. Virtually unknown in Portugal until he first made contacts in Leiria in the summer of 2014, Tolstikov is alleged among other things to have been behind the importation of large amounts of cash from Russia in violation of EU cash regulations.

Three top Portuguese clubs – Sporting Lisbon, Sporting Braga and Benfica – were reportedly searched because of football transfer negotiations conducted with Leiria, but are not themselves under suspicion.

Europol said in a statement that the investigation had dismantled an organized criminal network, composed mostly of Russians, operating in football circles in the UK, Germany, Moldova, Austria, Latvia and Estonia. The network, active at least since 2008, is thought to have been a cell within the Russian mafia, directly responsible for laundering money derived mostly from criminal activities committed outside the EU area.

Here’s a handy guide to the network’s modus operandi. Step one is to identify a club in financial trouble and infiltrate it with individuals posing as benefactors who provide much needed short-term donations or investments.

Once trust has been established, step two is for the same benefactors to buy the club and use it as a front for opaque holding companies, invariably owned by shell companies registered offshore and in tax havens. Thus the real owner and those who ultimately control the club remain unidentified, as does the true origin of the funds used to purchase it.

If you want to manipulate a club in this way, it’s best to remain as unostentatious as your greed and ill-gained power will permit. This last bit seems to have been the Leiria gang’s downfall.

All being well, though, once clubs like União de Leiria are under the control of the Russian mafia, the large scope of financial transactions, cross-border money flows and shortcomings in governance allow clubs to be used to launder dirty money. This is usually done by over or under valuing players on the transfer market and arranging television rights deals. Clubs can also be used for betting activities, both for the generation of illegal proceeds due to match fixing or for pure money laundering purposes.

Those somewhat baffled by such skullduggery should relax over the weekend if they want to try to get their heads around next week’s revelations. A vast trove of leaked information about those using tax havens is due to be published on the World Wide Web on Monday.

Just to recap, the Panama Papers scandal all started with the emails of a Panamanian law firm called Mossack Fonseca being penetrated by a hacker. A database comprising 11.5 million documents was subsequently distributed to the International Consortium of Investigative Journalists (ICIJ) for examination.

The first batch of Panama Papers released last month included references to at least 244 companies, 255 shareholders, 23 guests and 34 beneficiaries with Portuguese postal addresses. Monday’s batch is expected to be on a far bigger scale and will be of great interest to law and tax enforcement authorities around the world.

In a related piece of news, the European Central Bank has just announced it is going to stop producing €500 banknotes because of fears they are being used by criminals as a convenient way to launder money and finance terrorism. The bank will stop issuing the €500 notes around the end of 2018, but those currently in circulation will remain legal tender.

Here’s the good news for anyone planning to move a stash from under the mattress. A usually reliable media source mentioned this week that a million euros in €500 notes weighs 2.2 kilograms, or just under 5 pounds, and fits in a laptop bag.