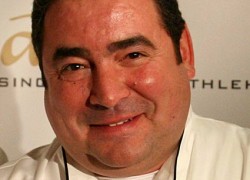 For each one of the thirteen 30-minute episodes, Emeril will visit a new city to feature three famous restaurants and interview Chefs and costumers. “The Originals with Emeril” will take place in New York, Los Angeles, Chicago, San Francisco, Boston, Dallas, Atlanta, Miami, and New Orleans.

Chef Emeril Lagasse has hosted over 2,000 shows on Food Network, and has been the food correspondent for ABC’s Good Morning America for over 13 years.

His show “Fresh Food Fast” launched in July 2010, and” Emeril Live” (formerly on Food Network), can currently be seen on Cooking Channel.

Chef Emeril Lagasse is the chef and proprietor of 12 restaurants including three in New Orleans, four in Las Vegas, two in Orlando, one in Miami, and one in Pennsylvania.

He is also the best-selling author of 15 cookbooks. His most recent book “Farm to Fork: Cooking Local, Cooking Fresh.”

Authentic Entertainment, Inc. is the producer of “The Originals with Emeril.”

Emeril Lagasse was born October 15, 1959, in  Fall River, Massachusetts, where he was raised by his French-Canadian father, Emeril Jr., and his Portuguese mother Hilda.