“The Best Chocolate Cake in the World” – New York 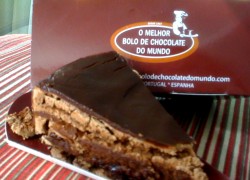 Portuguese Chef Carlos Braz Lopes is now world renown for his famous invention – the Best Chocolate Cake in the World  – an idea that started as a joke in 2002, when Chef Lopes was noticed by his Lisbon neighborly clients for a chocolate cake that – “voilá” – tasted different from the rest.

The word of mouth went around and Chef Lopes now spends a good deal of his time between his shops in Lisbon, São Paulo, Rio de Janeiro, Brasília, Salvador da Bahia, Madrid and New York.

In New York, the “Best Chocolate Cake in the World” is living up to his creator’s reputation. According to the Village Voice, business is booming. A first store opened in the Village last July, a second one followed – a third is now opening on the Upper East Side – while plans are under way for the newest location at 1046 Madison Avenue, between East 79th and 80th streets.