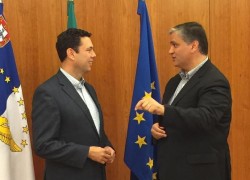 A US Congress delegation, of the Committee on Oversight and Government Reform of the House of Representatives, visited the Azores over the weekend to further discuss the strategic relevance of Lajes Air Base.

On Saturday, July 16, the 11 bipartisan delegation, led by Rep. Jason Chaffetz (R-Utah), held meetings with the President of the Government of the Azores, Vasco Cordeiro, on Terceira island. Jason Chaffetz is Chairman of the House Committee on Oversight and Government Reform.

The Committee is the entity responsible for internal investigations on the foundations of the Pentagon’s decision to headquarter the Joint Analysis and Intelligence Complex (JAIC) at Croughton Base in the United Kingdom.

Currently, the Congress is investigating the US military to evaluate charges that it manipulated studies to justify building an intelligence center in the United Kingdom after the Pentagon decided that Lajes Air Base was not a viable option.

Apparently, the plan to build a new base in the United Kingdom was based on incomplete and distorted information. The move caught the attention lawmakers, including Rep. Devin Nunes (R-California), chairman of the House Intelligence Committee, who considered the Lajes Air Base strategically more relevant for the mission.

This is the third visit of a US Congress delegation to Terceira Island, after the visit of the Committee on Appropriations in August 2015and the Committee on Intelligence in May of the same year. President Cordeiro held a bilateral meeting with the Permanent Bilateral Commission in Washington last May.

The Government of the Azores is in the process of negotiating with United States the implementation an economic revitalization plan for Terceira island, following the 2012 Pentagon’s decision to downsize the US military presence in the Lajes Air Base.

The reduction will involve the downsizing of 900 to 400 Portuguese civil workers and of 650 to 165 US civil and military personnel. Lajes Air Base is the island’s second largest employer. The move, which would save the Pentagon an estimated $35 million annually, will significantly impact the local economy.

According to President Cordeiro, the Government of the Azores is available and interested in analysing and supporting potential future projects of cooperation between the two countries.