A carved rock, apparently man-made, was found by archeologists on Terceira, Azores, believed to be over 900 years old.

A sample of the artifact was analyzed by an American radiocarbon research laboratory which concluded that the carved rock predates the Portuguese occupation of the Azores, discovered uninhabited by the Portuguese around 1427.

According to researcher Félix Rodrigues, of the University of the Azores, the technique that dated the rock is “extremely accurate.”  The sample was analyzed by the Beta Analytics Lab of Miami, USA, which is “ISSO-17025″ certified, he told Lusa news agency.

“The whole process, from data collection to analysis of the sample, was properly registered to ensure the objectivity of the scientific process,” Rodrigues told Lusa.

The bowl shaped artifact could not have been brought to the island later because “part of the rock is grounded on the island,” Rodrigues said. Additional circular and cubic carved rocks were found on the site. Some of them have been through “enormous wear and tear resulting from water erosion from within,” he told Lusa. 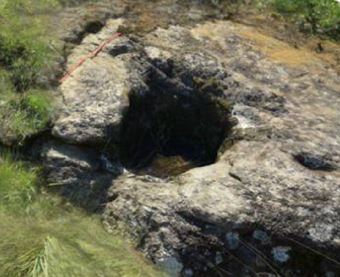 This one finding is the first step “extremely important” to clarify the question of human presence on the island and Rodrigues has “no doubt” that the carvings are man-made. Other archaeologists who have visited the site also believed the carvings “are a result of human intervention,” he said.

“If circular shapes may result from erosion, cubic forms do not result from the erosion process; therefore, they are marks of human intervention clearly identified,” he has concluded.

Rodrigues found the archeological artifact about three years ago in the vicinity of Grota do Medo. The rock is part of a larger “megalithic complex” which, according to Rodrigues, precedes the Portuguese occupation of the archipelago.

Last year, archaeologists claimed to have found rock art on the island of Terceira, which they believe to be thousands of years old. In the last three years, a variety of ancient archaeological findings have been identified on all the nine islands of the Azorean archipelago. They include an epigraph from Roman times, Carthaginian sanctuaries, cave art and megalithic structures.