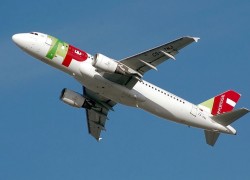 As condition for obtaining the three-year 78 billion-euro (US$116 billion) bailout with the European Union and the International Monetary, the Portuguese government is forced to sell its state run TAP Air Portugal, scheduled for auction later this summer.

Brazil’s Linhas Aéreas and Chile’s LAN Alliance, and British Air Always and Iberia Alliance, are strong contenders poised to bid for the Portuguese national airline. Other interested party for the bidding includes Germany’s Deutsche Lufthansa. Brazil will be the strongest bidder for the TAP acquisition, thought to be valued at around $500 million-euros.

Last year 1.4 million passengers used TAP to fly to Brazil, representing 74 flights per week. TAP is also the European airline with the most flights to the South America,  accounting for over a quarter of the total weekly seats available between Europe and Brazil to Belo Horizonte, Brasília, Campinas, Fortaleza, Natal, Recife, Rio de Janeiro, Salvador, São Paulo.

In 2010, the Portuguese national airline  reported  a profit of US$86 million , an increase of 8.7 over the previous year, the best result ever in the history of the company.  In 2010 TAP also carried 9.09 million passengers worldwide, 7.7 percent more than in 2009.

Most of the 2010 growth came from routes to Brazil and the Portuguese-speaking African countries, which generated 51 percent of its revenues representing a rise of 33 percent for Brazil and 6 percent for Africa.  Angola was the most important African market for TAP in 2010.

TAP Air Portugal, the leading Portuguese airline, is a Star Alliance member, the world’s largest network of airlines.  From its hub in Lisbon, TAP Portugal operates numerous domestic destinations in Portugal, and internationally in Europe, Asia, Africa, North and South America, including Canada and the United States.

With the United States, currently TAP Air Portugal operates flights to Newark departing from Lisbon and Porto, with seven flights per week out of Lisbon, and three from Porto. During the winter, it operates five-times-weekly services from Lisbon and twice-weekly from Porto. TAP currently connects Lisbon to Miami offering easy access to the cities of Fort Lauderdale, West Palm Beach, the Orlando theme parks, Fort Meyers and Tampa.

According to the JACDEC Airliner Safety Report released in January 2011, TAP Air Portugal was rated the Western Europe’s safest airline and the fourth world’s safest with three other airlines (Qantas, Air New Zealand, and Finnair).