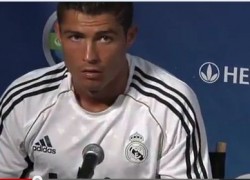 On Thursday, August 2, the Real Madrid team will have a friendly match against LA Galaxy for the Herbalife World Football Challenge event.

Ronaldo’s girlfriend, Irina Shayk, has traveled to New York City, a couple of days ahead of him, adding to rumors (not confirmed) that the Portuguese footballer superstar will play for the Real Madrid team vs. AC Milan, on August 8, at the Yankee Stadium, located in  New York City’s Bronx.

This most anticipated event will become a historic match between two of the most popular and decorated clubs in world soccer.

This is the third time, on the last 3 years, that the Real Madrid team has traveled to the US to train at the UCLA university campus. The team arrived at the camp on July 28.

Their training routine at the UCLA campus comprises of 2 training sessions, in the morning and the evening, with Real Madrid coach José Mourinho.