So what’s new? Corruption in Portugal is widespread – By Len Port 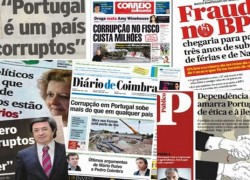 Perhaps this was said at least partly in jest, but it is certainly true that corruption lurks in the shadows from the bottom to the very top of politics in many countries all over the world. Portugal’s reputation in this regard is far from the worst, but it is still appalling.

Abuse of power for private gain has long been suspected not only within parliament and local administrations, but also the judiciary, the police, the military, state agencies and nationalized and private businesses. Many if not most culprits get away with it of course.

Transparency International, which calls itself the leading civil society organization fighting corruption worldwide, will launch its 2014 Corruption Perceptions Index on December 3. Portugal is likely to drop a peg or two from its position of 15th in the 28 EU countries and 33rd in the world.

Transparency International has been monitoring citizens’ perceptions annually for the past 20 years. Keeping scores like this is a helpful guide, but it doesn’t profess to tell anything like the whole story because corruption is such a crafty, behind closed doors and under-the-table activity.

According to this year’s anti-corruption report produced by the European Commission, 90% of the Portuguese population thinks corruption is widespread in Portugal. The average among EU member states is bad enough at 76%.

The same report reveals that more than 70% of those within companies who responded to the EC survey believe that corruption is a problem when doing business in Portugal.

Asked if they considered patronage and nepotism to be a problem for their company when doing business, the ‘yes’ figure was again about 70%. The great majority rated the ‘problems’ in doing business in Portugal as ‘serious’ or ‘very serious.’

Plenty of people also think the medical and health system is ‘corrupt’ or ‘extremely corrupt’ and that backhanders and kickbacks are sometimes involved in awarding public tenders, or the issuing of permits and licenses for building works or safety and sanitary arrangements.

Trying to keep control on corruption in Portugal starts with the national anti-corruption unit of the Polícia Judiciária (UNCC). The investigation of misconduct and abuse of power committed by holders of political office is but one of UNCC’s responsibilities.

The prevention, detection and investigation of all kinds of embezzlement, influence peddling, fraud and forgery is up to the UNCC. Big job. Although the unit is said to be under-resourced, the arrest of former prime minister José Sócrates and the unearthing of the Golden Visa scandal suggests that investigators have been working at full throttle.

How these new corruption cases are handled – and if and when they eventually reach trial – will be watched meticulously by the media, bearing in mind that the judicial system itself is perceived by many to be very corrupt. The statute of limitation for corruption offences is 15 years, which is just as well because court processes are often woefully slow.

Front-page news coverage of the Sócrates and Golden Visa cases came hard on the heels of sensational allegations against FIFA officials awarding the staging of the 2022 World Cup to Qatar, violent outrage over government corruption in Mexico and shenanigans in China that have resulted in more than 13,000 officials being found guilty of corruption and bribery in the first nine months of this year alone.

So what’s new? Over the years, leaders of all stripes – dictators and pillars of democracy alike – have been unable to resist the temptation to abuse their power for personal gain.

Among the worst in modern history was the president of Zaire from 1965 to 1997, Mobutu Sese Seko. He embezzled somewhere between $5 billion and $15 billion. In addition to chartering supersonic Concorde aircraft for shopping trips to Paris, Mobutu and his family, together with an army of bodyguards, used to enjoy visits to his holiday mansion in the Algarve.

The wise man who said, “Corrupt politicians make the other ten percent look bad” was Henry Kissinger, national security adviser and then secretary of state to Richard Nixon who presided over arguably one of the most corrupt administrations in the history of the United States.

The American author John Steinbeck was of the opinion that “power does not corrupt. Fear corrupts…perhaps the fear of a loss of power.”

Mobutu feared being toppled by a military coup and being thrown out of his homeland, which is what happened.

Richard Nixon’s undoing was his desperate cover-up maneuverings, fuelled by fear of being exposed by his many political enemies for the 1972 Watergate break-in.

While José Sócrates has little else in common with these two mega-rogues, he must have known that with the worsening of the economic crisis in 2011 an ignominious fall from power was inevitable.

Perhaps the moral of the story lies with a saying attributed to the former Socialist prime minister’s namesake, the classical Greek philosopher Socrates: “He is richest who is content with the least…”