Skin cancer on the rise in Portugal 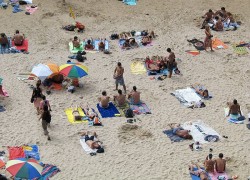 According to the Portuguese Skin Cancer Association, an estimated 10,000 new cases of skin cancer are diagnosed every year in Portugal, more than 1,000 are malignant, and the majority of the cases are caused by over-exposure to the sun.

Skin cancer cases have been gradually rising in Portugal as well as in various other European countries that have “greater solar exposure,” and particularly among children and young adults.

The World Health Organization (WHO) has projected that Portugal will see an increase of 34 percent in diagnosed cancers until 2030, and that more than 32 thousand will died every year in Portugal victims of the disease. Currently 24 thousand Portuguese died of cancer every year. Portugal’s population is estimated at 10,760, 305 (2011).