The Azores based developers of Ziphius, the first app-controlled aquatic drone, have announced today their invention is going into mass production and that they are seeking venture partners.

According to Azorean, the company behind the development of Ziphius, as first step Ziphius is launching its Kickstarter campain,a funding platform for creative projects to help finance the mass production of the drone, with a funding goal of $125,000 USD.

Azorean is launching the Kickstarter campaign, after double winning the “Judges and Readers Choice” first place prizes at the Engadget Insert Coin: New Challengers Competition in March 2013, at the International Technology Fair, in San Francisco, USA. 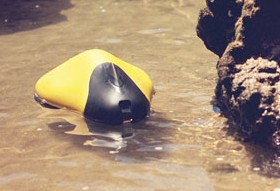 At the competition, a team of Azorean inventors associated with Aquatic Technologies, based on São Miguel island, Azores, was the winner of the Grand Prize ($20,000) and the Audience Award ($5,000) for the underwater robot Ziphius.

According to developers, this double victory further proves that Ziphius has a place in the global gadget market and deserves to be shared with the world! The goal is to take its extensively tested prototype to the next level – the industrialization phase.

“Ziphius is great fun for the entire family; it’s perfect for entertainment purposes and serves as a tech-tool to explore the ocean, as well as other activities related to aquatic sports and environmental awareness. For all these reasons and some, we hope people will support our dream to create something that we would really like to see exist in the world,” said Edmundo Nobre, Azorean’s CEO in a prepared stamen. “In reality, the backers supporting this project are the ones that will help it come to life,” he said.

Ziphius is an aquatic drone that can happily operate in seawater as well as fresh water. Ziphius offers “zillions” of fun. It can be used for entertainment (including autonomous ball-chasing) or for nature photography. Through a WiFi connection you can use an Android or iOS tablet or smartphone to

control Ziphius’ surprisingly powerful motors and its camera’s vertical position, as well as watching a live video feed at the same time.

The final version of the drone comes with an interchangeable chassis to suit different purposes or simply for personalization, and internally is equipped with a camera module, which enables half HD streaming and onboard HD capture. Ziphius is on Kickstarter to get the needed funds for mass production. Ziphius is the first prototype drone developed by the  Azorean Aquatic Technologies, based in Ponta Delgada , a spin-off of technology YDreams.