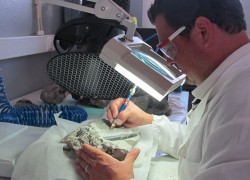 Portuguese and Spanish paleontologists revealed on Tuesday they had discovered a completely new species of dinosaur which they believe to be the smallest herbivorous dinosaur found in Portugal.

According to the paleontologists, it is probably the tiniest of all plant-eating dinosaurs found, apparently still growing, and that when fully grown would have become larger.

Named “Eousdryosaurus nanohallucis“, the dinosaur found comprises of part of the tail, the pelvis and rear paws. It was an herbivore that could run very quickly and agilely with just two legs. It had small arms and a long tail and would have stood about half a meter high and 1.6 meters long.