Review: When you return home without ever leaving – by Vamberto Freitas 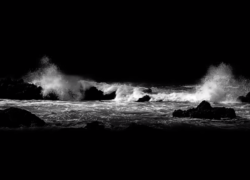 Azorean Suite: A poem of the moment is fortunately now available in book form, in the original English version, as well as the full translation (into Portuguese) made by the author with José Francisco Costa, who emigrated to the USA, and by Eduardo Bettencourt Pinto, who emigrated to Canada, both poets and prose writers recognized among us here in the Azores and elsewhere.

Scott Edward Anderson is one of the most original writers for many reasons but primarily for his late rediscovery of his ancestry and his irrepressible desire to write about the power that the Azores has on him, namely (the island of) São Miguel, from where his great-grandparents left for America, and where he also met with a good number of his relatives currently on the island, who received him with the greatest affection. His great-grandparents emigrated to the New World in 1906, but Scott Edward Anderson investigates earlier centuries, and suspects that his family tree goes back to New Christians, and that also at least some of those same ancestors were tried and burned at the stake in Rossio (Lisbon) between 1559-1576; others were among the 104 Micaelenses [accused of being “Judaizers”]. Anderson explores this story of terror in sections of his poem.

“Suite” here refers to classical musical pieces, which leads Nuno Júdice to write on the back cover of the book that “When reading the Azorean Suite all the pieces come together, as in a puzzle, and we watch the development of this struggle with memory to bring back the familiar names, the stories once lost, the journeys that led to the exile of anonymous heroes to which Scott Edward Anderson restores the names and the endless adventure of emigration crossed with exile.”

The discovery of the author’s origins, which inspired this long poem (I’ll speak of another of his poems at another time), began when he was invited by Oona Patrick, also Luso-American, and Brendan Bowles, to take part in the literary event Disquiet, which has its annual center in Lisbon, but in 2018 began to hold part of its sessions in the Azores. 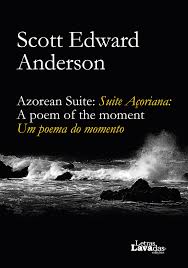 Azorean Suite: A poem of the moment is of an originality that I believe is unmatched among us. It uses the words or verses and prose of countless Azorean and Continental writers, as well as others, like Herman Melville and his Moby Dick and the praise from this author for the whalers of the islands. [Anderson writes in his Introduction:] “I took as a model Peter Dale Scott’s Seculum Trilogy, especially Listening to the Candle: A Poem on Impulse, which, as one critic described, uses autobiographical elements, as well as quotes from various sources, in order to extend the limits of personal history and stretch the poet’s emotional path… The poem (by Scott Edward Anderson) is in the form of a Suite, which typically consists of four movements on a related theme, but differing in tone and form.”

Emotional, with regional and some national history, this is an autobiography without any disguises, in a language simultaneously of our every day as well as erudite, all of it with a luminosity that leaves the reader captivated, line by line, verse by verse, both in English and in Portuguese. It brings forth the many names of his ancestors, as well as those who still live on the island today, so many that it would take up much space here to name them all.

The author is now part of an already considerable number of Luso-American writers who consistently have the Azores—and in some cases the Continent—as the main theme of their writing. They belong entirely to the new North American literature, but they are undeniably, as I have mentioned on other occasions, part of our best and most modern literary collection. 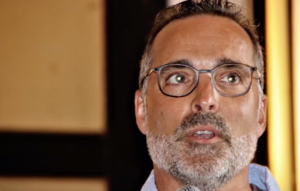 Scott Edward Anderson has had a long career in the USA on issues related to the environment. His interest is now transferred to these islands, which are now his homeland, mainly São Miguel for the obvious reasons I have already mentioned. Nothing escapes his attention, not the people and their rites, not the blue or leaden sea and its effects on the other dramatic landscapes of this island, not even Azorean literature and that of Continental authors or even authors from other countries. For now, he is absorbed in translating into English certain Azorean writers, and I believe that these days, where he lives in Brooklyn, New York, he is also translating [Corsário das Ilhas] by Vitorino Nemésio.

In this current published work, he goes so far as to identify the birthplace or old experiences of some of his ancestors. To my surprise, some by the name of Borges were from  Rosto do Cão in São Roque (São Miguel), a few steps from the condominium I’ve lived in for almost thirty years, and whom he imagines were fishermen, and one of them, named António Borges, a doctor.

This is a poem of long memory, which he thoroughly explored. I had the pleasure of meeting Scott Edward Anderson and talking with him at length about these and other issues. His enthusiasm and joy at finally rediscovering (another self) was fascinating to me. We have been in constant virtual contact ever since. I have yet to read all his work, but it goes without saying that I will, with increased interest, in the pleasure of reading his work.

The poems in this book are almost in novelistic sequence, holding the reader to each word or verse:

“My sense of myself is growing, emerging,

the more I connect with this island

and my heritage here—

How did I live so long without this connection,

without the connections to family and friends

Fifty-six years without it, but now I can’t let go,

my roots grow deeper with each visit

my longing digs into my heart

each time I leave—

my own saudades da terra

gripping my heart and soul,

as if fate, too, has grabbed ahold,

and opened-up my heart to a home

I never knew I had—”

The spacing attempts to compliment the way he wrote his poems. “One can be born on an island” – Eduardo Bettencourt Pinto is quoted on the cover of this book – “in two ways: From the body of a woman or the radiance of sensibility” [the description goes on] … “the award-winning poet Scott Edward Anderson explores the nature of what it is to be born from the radiance of sensibility of his ancestral islands. Using autobiographical elements as well as quotes from Azorean poets, scientists and naturalists, Anderson extends the limits of personal history and expands the poet’s emotional journey.”

In addition to awards he received for other works last year, Anderson was issued from Letras Lavadas one of their five Certificates of Recognition given to books of various genres published in 2019 by different publishers, for his prose book FALLING UP: A Memoir of Second Chances, published by [Homebound Publications’] Little Bound Books Essay Series, and acclaimed by several US writers. The Azores are also present in this volume. For the rest, he also published Dwelling: an ecopoem, which in the last part includes some prose under the sub-title The Questions of “Dwelling” & Heidegger.

On the last pages of Azorean Suite: A poem of the moment, he includes a list of all the writers he cites, and many Azoreans from the past and present, I cannot stress enough, who figure prominently.

“Published (Portuguese) in “Border Crossings” by Açoriano Oriental, 11 December 2020. Translation by Scott Edward Anderson. Vamberto Freitas was born in Fontinhas, Terceira Island, Portugal, Vamberto Freitas emigrated to California with his family as a child, and graduated from California State University, Fullerton, in 1974, with a degree in Latin American Studies. He returned to Portugal as an adult, and now resides in Ponta Delgada, in the Azores. A recently retired lecturer at the University of the Azores, Freitas was a regular contributor to the literary supplement of the Lisbon newspaper Diário de Notícias, and still publishes periodically in Açoriano Oriental and Jornal de Letras in Lisbon, and in other national and regional journals.”

The journey: Scott Edward Anderson at home away from home – Interview

Readers in the US and Canada may purchase the book here.