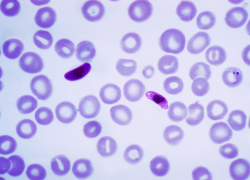 A team of Portuguese researchers lead by Miguel Soares from the Gulbenkian Institute, Portugal, discovered a molecular mechanism that explains how the “sickle cell hemoglobin” reduces the number of malaria parasites in the blood, protecting people from the disease.

Their research shows that people who carry one copy of a mutation that leads to sickle-cell disease are protected from the worst effects of malaria.

Using mice genetically engineered to make human hemoglobin with the sickle-cell mutation, Soares and his colleagues discovered that the mutation primes the body to deal with the red blood cell–shredding activities of the malaria parasite.

The Gulbenkian Institute researchers hope this new development will lead to new treatment options, providing doctors with a range of new drugs that could save many lives.

The findings were published in the April “Cell,” one of the world’s most prestigious scientific journals.

About 3.3 billion people – half of the world’s population – are at risk of malaria. Every year, this leads to about 250 million malaria cases and nearly one million deaths. People living in the poorest countries are the most vulnerable. Malaria is the number one killer of children under five in sub-Saharan Africa, claiming more than 1 million lives a year.