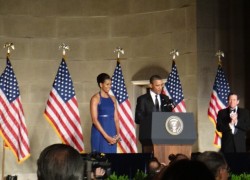 In his speech, President Obama praised  Souto de Moura’s ecological work for using natural materials, appearing to be “effortless as it is beautiful.”

With the First Lady Michelle Obama by his side, the President said, “Souto de Moura spent his career pushing the boundaries of his art, doing so in a way that serves the public good.”

Thanking all architects for “making the world a better place,” President Obama went on praising Souto de Moura for creating buildings that combine “form and function, artistry and accessibility.”

He then referred to the 2004 soccer stadium of Braga, designed by Souto de Moura, built on the side of a mountain, allowing those who can’t afford tickets to watch the game from the hills.  The President said, “His simple shapes and clean lines always fit seamlessly into the surroundings.”

Referring to once having harbored dreams of becoming an architect himself, the President said, “I expected to be more creative than I turned out, so I turned to politics instead.”

REMARKS BY THE PRESIDENT

AT THE PRITZKER ARCHITECTURE PRIZE EVENT

Well, thank you, Tom, for that introduction. Thank you to the entire Pritzker family for your friendship and incredible generosity towards so many causes. I want to welcome as well the diplomatic corps that is here, as well as Secretary Arne Duncan.

On behalf of Michelle and myself, I want to begin by congratulating tonight’s winner, Eduardo Souto de Moura. And I also want to recognize the members of the prize jury, who I think have a very difficult task in choosing from so many outstanding architects all around the world.

Now, as Tom mentioned, my interest in architecture goes way back. There was a time when I thought I could be an architect, where I expected to be more creative than I turned out, so I had to go into politics instead. (Laughter.)

And as the Pritzkers and so many others here can attest, if you love architecture there are few better places to live than in my hometown of Chicago. (Applause.) It is the birthplace of the skyscraper — a city filled with buildings and public spaces designed by architects like Louis Sullivan, Frank Lloyd Wright and Frank Gehry, who is here tonight.

In fact, the headquarters of our last campaign was in a building based on a design by Mies van der Rohe. And for two years, we crammed it full of hundreds of people working around the clock and surviving on nothing but pizza. (Laughter.) I’m not sure if that’s what Mies had in mind, but it worked out pretty well for us.

And that’s what architecture is all about. It’s about creating buildings and spaces that inspire us, that help us do our jobs, that bring us together, and that become, at their best, works of art that we can move through and live in. And in the end, that’s why architecture can be considered the most democratic of art forms.

That’s perhaps why Thomas Jefferson, who helped enshrine the founding principles of our nation, had such a passion for architecture and design. He spent more than 50 years perfecting his home at Monticello. And he spent countless hours sketching and revising his architectural drawings for the University of Virginia — a place where he hoped generations would study and become, as he described it, “the future bulwark of the human mind in this hemisphere.”

Like Jefferson, tonight’s honoree has spent his career not only pushing the boundaries of his art, but doing so in a way that serves the public good. Eduardo Souto de Moura has designed homes, shopping centers, art galleries, schools and subway stations — all in a style that seems as effortless as it is beautiful. He’s an expert at the use of different materials and colors, and his simple shapes and clean lines always fit seamlessly into their surroundings.

Perhaps Eduardo’s most famous work is the stadium he designed in Braga, Portugal. Never one to settle for the easy answer, Eduardo wanted to build this particular stadium on the side of a mountain. So he blasted out nearly a million and a half cubic yards of granite from the mountainside, then crushed it to make the concrete necessary to build the stadium.

He also took great care to position the stadium in such a way that anyone who couldn’t afford a ticket could watch the match from the surrounding hillsides. Kind of like Portugal’s version of Wrigley Field. (Laughter.)

And that combination of form and function, of artistry and accessibility, is why today we honor Eduardo with what is known as the “Nobel Prize of architecture.” As Frank Gehry, a former winner of this prize, said, “Architecture should speak of its time and place, but yearn for timelessness.” I want to thank all the men and women who create these timeless works of art — not only to bring us joy, but to help make this world a better place.

And, Tom, thank you again for your extraordinary patronage of architecture. It makes an enormous difference. Thank you very much. (Applause.)