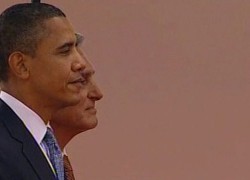 President of Portugal Cavaco Silva will meet President Barak Obama in the White House, November 9. The meeting is scheduled for 4:15pm at the Oval Office, the office of President Cavaco Silva announced Saturday.

The agenda for the meeting was not revealed, but a statement from the White House, released November 5 by the Office of the Press Secretary, stated

President Obama will host President Anibal Cavaco Silva of Portugal for a meeting in the Oval Office on Wednesday, November 9th.  The President welcomes the opportunity to reciprocate the warm hospitality that he received during his visit to Lisbon in November 2010.  The United States and Portugal are strong NATO allies and cooperate closely in the United Nations Security Council, where Portugal currently serves as Council President.  President Obama looks forward to consulting with President Cavaco Silva about preparations for the 2012 NATO Summit that the U.S. will host in Chicago.  The two Presidents will also discuss the revitalized U.S.-Portugal Bilateral Commission, enhancement of bilateral economic and commercial relations, cooperation in education, science and technology, the promotion of democracy, good governance and human rights around the world, and U.S. support for Portugal’s implementation of its IMF-EU reform program.

Next week, the President of Portugal is visiting the United States from November 9 through November 15 with stops in New York, Newark, Washington and California.

In New York, on November 9, President Cavaco Silva will participate in the first UN Security Council meeting under Portuguese leadership. The meeting will focus on the issue of protection for civilians during civil conflicts. He is also scheduled to meet with UN Secretary General Ban Ki-Moon and UN Security Council member states representatives.

On November 12, in Washington, Cavaco Silva is a guest at the Portuguese American Leadership Council (PALCUS), to participate in the 15th PALCUS Annual Gala.

While in Washington, President Cavaco Silva will hold meetings with Portuguese representatives at the International Monetary Fund, the World Bank and the Interamerican Development Bank and heads of US based think-tanks. He will also  visit the National Gallery before presiding at the II Convention of Portuguese-American Elected Officials to be held at the Portuguese Embassy.

On November 19, 2010, President Barak Obama paid a visit to President Cavaco Silva, at the Palácio de Belém, the official residence of Portugal’s President, when he attended last year’s NATO summit in Lisbon.