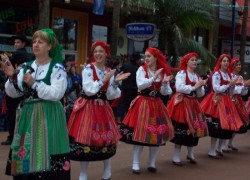 Estimates indicate that  about 1.4 million individuals living in the United States today are of Portuguese ancestry, with a large percentage coming from the Azores. Presently, there are sizable communities mostly in Massachusetts, Rhode Island, New Jersey, Florida, Louisiana, Nevada, California, and Hawaii.

The Portuguese presence in the United States goes back to colonial times. Still the first significant Portuguese settlements were established around 1850, both on the East and West coasts. Only in the first two decades of the twentieth century, after successive waves of immigration (about 130,000) large communities were formed.

Besides being well organized, the Portuguese American community is also well connected by the thousands through the traditional media and the digital media. This includes a large number of newspapers, scores of radio and television stations, and a myriad of social media venues such as Facebook, blogs, webpages, forums and chat rooms, including a variety of genealogical online sites.

Like many other immigrant groups in the past, the Portuguese community in the United States didn’t remain passive in face of prejudice, discrimination and pressure to assimilate. To defend themselves against those forces the Portuguese created mutual aid networks by establishing their own community organizations.

In 1847, the first Portuguese mutual aid society was created in the United States — the Lusitania-Portuguese Benevolent Association — in New Orleans. It was established by a group of Azorean laborers, the first known Portuguese settlers in the South. They were recruited in 1840 to work in a Louisiana sugar plantation. Reportedly, some of them fought in the Confederate Army during the Civil War (Cardozo, 1976).

On the West Coast, one of first Portuguese settlements was established in California, in 1850, during the Gold Rush by a group of about 100 individuals.  One decade later, they were 1,560 (Cardozo, 1976).

One of the first Portuguese families to have settled on the East Coast came from the Azores to Fall River (MA) in 1850 (Cardozo, 1976).  Today Fall River hosts one of the largest Portuguese heritage communities in the United States with the highest concentration of Americans of Portuguese descent in the country, most of them of Azorean origin, many from São Miguel island.

The second Portuguese mutual-aid society created  in the United States was established on the East Coast — the Sociedade Portugueza de Beneficência de Massachusetts – founded in Boston in 1866 (Cardozo,1876).

In 1868, on the West Coast, a group of Portuguese immigrants, presided over by Henrique Rocha Martinho, a dentist native of Madeira, established the Associação Portuguesa Protectora e Beneficiente do Estado da Califórnia (A.P.P.B.) — the first of its kind in the country and in the City of San Francisco (Cardozo, 1976).

Fall River (MA), with a total population of 95,072, remains the city with the highest proportion of ethnically Portuguese residents (43.9%)  in the United States.

(*)  Detailed demographics on the Portuguese communities in the United States were not immediately available in the US 2010 Census. The US Census Bureau will release data on specific ethnic groups, including the Portuguese group, later this year and/or next year.

Carolina Matos is the founder and editor of the Portuguese American Journal online. She was the Editor–in-Chief for The Portuguese American Journal in print, from 1985 to 1995. From 1995 to 2010, she was a consultant for Lisbon based Luso-American Development Foundation (FLAD). She graduated with a Bachelor’s Degree in Liberal Arts and a Master’s Degree in English and Education from Brown University and holds a Doctorate in Education from Lesley University. She has been an adjunct professor at Lesley University where she has taught undergraduate and graduate courses. In 2004, Carolina Matos was honored with the Comenda da Ordem do Infante D. Henrique presented by Jorge Sampaio, President of Portugal.