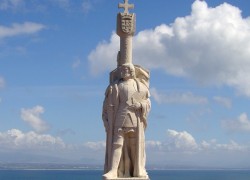 The Luso-American Education Foundation, with the co-sponsorship of the Tulare Joint Union High School District, organized its 35th annual Conference on Education and Culture under the topic “Portuguese-American Communities: Our Heritage – Our Future.”

The event started on March 24th with an exhibit at Tulare Union Library by Portuguese artist Vasco Costa.

It also included book presentations at the same library, a concert by Tulare’s Portuguese Marching Band in the Tulare Community Auditorium and several workshops. The keynote speaker was Francisco Semião, the director of the National Organization of Portuguese-Americans.

The event ended on March 27th at the Tulare-Angrense Athletic Club. A group of seven Portuguese-Americans from Tulare spoke about how the Portuguese language education in high school impacted their lives.