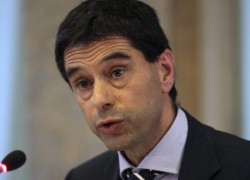 Gaspar concluded his visit to New York on Friday after meeting with investment representatives from Goldman Sachs, Bank of America, Merrill Lynch and JP Morgan.

According to Margan Stanley analysts, cited by Bloomberg, “Portugal may need to ask for a second bailout by September as the nation is hamstrung by weak economic growth and lack of access to bond markets at affordable rates.”

The Portuguese administration is implementing a program of austerity measures according to the 78 billion euro program negotiated last May with Portugal’s European Union partners and the International Monetary Fund (IMF).