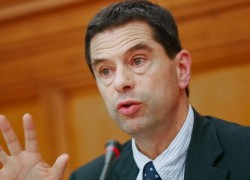 At the meetings, Gaspar will explain the progress with the implementation of the bailout program negotiated last May by Portugal with its European Union partners and the International Monetary Fund (IMF).

While the United States is not directly involved in Portugal’s financial rescue plan, it is a leading member of the IMF which covers one-third of Lisbon’s 78 billion euro program.

During his two-day stay in Washington, the Portuguese Finance Minister will attend on Monday a luncheon meeting at the Peter G. Peterson Institute for International Economics where he will make a speech on the topic of “Portugal: gaining credibility and competitiveness.” The Institute plays a central role in the European debt crisis.

In the afternoon, Vitor Gaspar will address the Portuguese financial situation under the topic “Adjusting in the euro area” at a National Press Club Newsmaker news conference.

Dr. Gaspar, 52, became Finance Minister in June as part of the new Portuguese government headed by Premier Pedro Passos Coelho. He was previously head of the Bureau of Policy Advisers of the European Commission (2007–10), special adviser at the Bank of Portugal and the first director-general for research at the European Central Bank (1998–2004).

He has also served as director of the Research and Statistics Department of Banco de Portugal and director of Economic Studies at the Ministry of Finance and was the personal representative of his Minister of Finance to the intergovernmental conference that prepared the Maastricht Treaty.

He has been professor of economics at Lisbon’s Catholic University and has written extensively on a wide range of economic topics, including the book Imperfect Knowledge with Monetary Policy co-authored with Otmar Issing and published by Cambridge University Press.