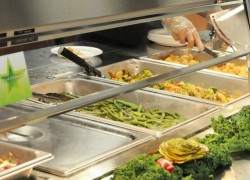 The Portuguese government is banning all unhealthy foods and drinks from all public health services providers, following the publication of an administrative order published in ‘Diário da República’ the official journal.

Thus, health centers and hospitals, as well as any institution of the Ministry of Health, will be prohibited from having vending machines for foods with excess calories and in particular processed foods with high salt, sugar and of trans fats. It is also forbidden to sell salty and fatty foodstuffs such as pastries and breads with sweet fillings, charcuterie products, sandwiches with mayonnaise sauces, ketchup or mustard, fatty or sugary biscuits, sweets, snacks, desserts, quick meals, large chocolates and alcoholic drinks. Also, the dispensers of hot drinks must reduce the amount of added sugar up to a minimum of five grams.

The action was promoted by the working group – Integrated Strategy for the Promotion of Healthy Food (EIPAS) – which goal is to encourage food producers to offer healthier choices to consumers and prevent the sale of products that are harmful to public health.

In a prepared report, the authorities stressed that, as scientific studies have shown, the prevalence of nutrition related diseases is very high among the Portuguese population, where about 1 in 4 Portuguese have hypertension and 1 in 10 suffers from diabetes.

“In Portugal, inadequate eating habits are the risk factor that most contributes to the total years of lost healthy life in the Portuguese population (15.8%), an important determinant of chronic disease, representing more than 86% of the burden of disease in our health system, ” the report said.

“There is also a significant availability of foods with high amounts of sugar, added salt and fats. Scientific evidence shows that high sugar consumption is related to the prevalence of chronic diseases such as obesity and diabetes, the excessive consumption of salt associated with hypertension and cerebrovascular disease,” the report reads.

The order becomes effective within the next three months, with six months to review contracts with food producers and distributors. These new measures will be added the existing guidelines for food supply in public schools at all levels of education, including higher education.

The World Health Organization (WHO) and the European Union have already recommended that Portugal reduce salt consumption between 3% and 4% per year over the next four years, to five grams a day per person.

In March 2017, the Portuguese parliament signed a bill into law that requires all public cafeterias in schools, universities, hospitals, and prisons, to serve at least one “strictly vegetarian” (vegan) option.

Portugal has also introduced a tax on soft drinks increasing the price of a 1.5 liter bottle by 15-30 cents. The tax will be levied on soft drinks regardless of whether they contain sugar or not. Other policies will limit the volume and supply of individual sugar packages to consumers.

Effective January 1, 2018, Portugal will be moving towards a full ban on smoking indoors in public places. Smokers who break the law can be fined up to €750 and establishments which permit illegal smoking can be fined up to €250,000. Tobacco can only be promoted at the point of sale with no ban on vending machines. Also, alcohol can only be advertised on TV and radio after 7:00pm andsold in shops between 8.00am and midnight. Taxes on beer and spirits are about average for the EU and there is no wine duty.