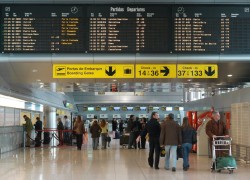 Portugal has acknowledged a persistent negative emigration trend resulting in a migratory deficit – with more young qualified Portuguese leaving the country than returning – and that the country is not attracting those who have left in recent years.

According to Secretary of State for the Communities, José Luís Carneiro, in spite of the positive domestic economic growth, those who left, felt they were not able to penetrate the job market.

This condition, “creates a certain ease in the exit and settlement, therefore, returning to the country will take longer than the exit,” he told Rádio Renascença.

In the last 27 years, emigration from Portugal has grown by 20%. Between 1990 and 2014, the migration trend averaged 100,000 Portuguese a year,  leaving the country for better working conditions abroad.

In 2016, an estimated 100 thousand qualified Portuguese young workers left the country, 10,000 less than in 2015, according to a report released by the national Observatory of Emigration.

“In 2016, this downward trend has even slightly accelerated, leaving the number of emigrants stand around 100,000 individuals,” said the report for last year.

In cumulative terms, Portugal is the European Union country with more emigrants in proportion to the resident population, the report said.

According to the United Nations, currently about 2.3 million Portuguese live outside Portugal. The total population of Portugal is estimated at 10.32 million (2016).

Europe is the main destination for the majority of Portuguese emigrants; France is the main host country, followed by Switzerland, the United Kingdom, Spain, Luxembourg and Germany.

Outside of Europe, the main destination countries for Portuguese emigration are Angola and Mozambique in Africa.

At the global level, the United States and Canada are the preferred destinations for Portuguese migrants. Portugal ranks as the 26th country with more migrants abroad, in a ranking that is led by India.