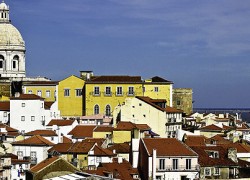 At a time when Britain is worrying about an influx of workers from poor European Union countries, Portugal is enthusiastically encouraging rich entrepreneurs from outside the EU.

Romanian and Bulgarians, especially those likely to seek welfare benefits, are causing panic in Britain because immigration restrictions are to be lifted on January 1.

Meanwhile, Chinese, Russian and other foreign nationals are being wholeheartedly welcomed here in return for investments under the so-called Golden Visa scheme.

In return for buying property for upwards of half a million Euros ($700,000), or capital transfers of more than a million, a Golden Visa allows non-EU citizens to reside in Portugal for five years without having to pay tax on foreign-earnings. It also gives the right to move around in the Schengen area, which includes nearly all the countries across Europe, but not the UK.

After the initial five years, visa holders may become Portuguese passport holders and thus full citizens of the European Union.

A recent YouGov poll for The Sun newspaper in the UK showed that 72% of Britons wanted their government to limit immigration from other EU countries, fearing that immigrants might take their jobs or strain public services.

The European Commission rebuked Prime Minister David Cameron for saying he aims to restrict the relocation of migrants from poorer to richer EU states, saying EU membership confers only a qualified right to freedom of movement.

Portugal being one of the poorer states does not have an immigration problem. On the contrary, the mass exodus of Portuguese job seekers to richer countries, including Britain, continued this year at about the same rate as last. Official estimates put the figure at between 100,000 and 120,000 annually leaving their homeland.

High unemployment and severe austerity make Portugal an unattractive country to many outsiders too. Recent reports say even refugees arriving from Syria and other Muslim conflict zones don’t want to stay here. Portugal is merely a stepping-stone.

It seems to be merely a stepping-stone for many of those applying for golden vistas too. Unlike the Romanians and Bulgarians who are hoping to stay in Britain, many of the Chinese and other foreign investors are using their golden visas to set up yield-bearing arrangements in this country that will allow them to live or do business elsewhere in Europe.

For example, they are looking for easily rentable properties in prime Lisbon locations or condominium resorts in the Algarve. Estate agents are scrambling for their business. Many highly attractive properties are on offer at prices that have dropped by nearly a third since the country was forced to apply for a bailout in 2011.

Agents say plush apartments are available in Lisbon at the same price buyers would have to pay for properties half the size in Beijing or Shanghai. With this in mind, delegations from Portugal attended China’s largest international real estate fair in Shanghai this month.

The Golden Visa scheme attracted little interest when it was introduced over a year ago. It now seems to be taking off, with applications rolling in mainly from China, but also Russia, Brazil, Angola and India.

According to an official tally released early this month, the scheme had brought in a total of €222 million from 256 visa holders. More than 300 applications were said to be in the pipeline. Nearly all were expected to be approved, which would bring the total investment since the scheme was set up to around €600,000 million.

Introduced by the center-right coalition government, the golden visa program has the tacit support of the Socialist opposition party. The only severe critics are the far-right National Renovator party whose leader, José Pinto-Coelho, claims the country is “prostituting itself.”

If so, it is not the only one. Other EU countries in serious financial straits – Spain, Greece and Cyprus – have their own golden visa programs. So too do some of Europe’s wealthier nations, including Germany and the Netherlands.

As the year ends, the poor are as problematic as ever, while the competition to attract the rich is fierce and rewarding.