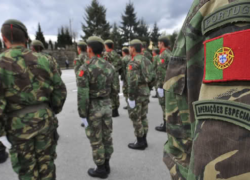 Ten suspects have been arrested, after more than 300 officers raided nearly 100 homes across the country to collect evidence in Lisbon, Bragança, Porto de Mós, Entroncamento, Setúbal, Beja, Faro and Funchal, police said in a statement.

“What we are looking into now is the possibility that some soldiers taking part in the national detached force in CAR were used as couriers in the trafficking of diamonds, gold and drugs,” an official source stated.

According to an armed forces source, the Portuguese soldiers have been under suspicion  since December 2019. The United Nations was informed of the illicit activity, after being tipped-off last year. The illicit traffic was part of a money laundering scheme with international links.

“Everything suggests that these were activities undertaken on their own initiative by a handful of soldiers and not something systemic,” Defense Minister João Gomes Cravinho said in a statement.

Meanwhile, RTP has reported today that “several dozen people and around forty companies could be part of this network,” acting as a “front” for the scheme, under alleged leader Paulo Nazaré.

The investigation believes that for years, the scheme was the vehicle for “laundering money” for businesses, military officials and diplomats.

Portuguese armed forces have since stepped up the scrutiny of military flights from Central African Republic, where hundreds of Portuguese soldiers, including paratroopers and commandos, have been deployed on UN peacekeeping missions over the years.

Currently,  António Guterres,  a former Portuguese prime minister, is the ninth secretary-general of the United Nations.