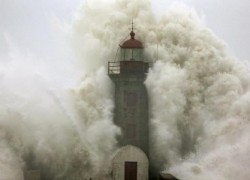 In the aftermath of the most violent waves in 20 years, the cash-strapped Portuguese government is committed to finding €300 million for reconstruction projects, and to reassessing the national strategy for coastal protection.

This is being done amid the backdrop of the National Strategy for Adaptation to Climate Change (ENAAC), part of an initiative set in motion by the European Commission to help EU members’ access and share information on the subject.

The EC’s view is that the climate is certainly changing and that it will continue to do so with far-reaching consequences. ‘Adaptation’ means anticipating the adverse effects and taking appropriate action to prevent or minimize the damage they can cause.

“Early action will save damage costs later on, so adaptation strategies are needed at all levels of administration, from local to international,” according to the EC.

So Portugal and the EC seem to be in accord, but there is still considerable public confusion internationally about the way in which the climate is changing and whether or not humans are making things worse.

Opinions differ among the global ‘experts’ and it is hard to know who to believe because the science is all so iffy.

Prime Minister David Cameron told the British parliament that climate change could be behind the relentless rains and flooding that wreaked havoc on Britain recently, but according to the British Met office “it is too early” to make that kind of judgment.

With the same sort of diffidence, the Intergovernmental Panel on Climate Change (IPCC) – the world leader on research into climate change – last year published a report claiming there was some evidence linking some types of extreme weather with man-made climate change.

Extreme weather events have been occurring sporadically throughout history (at least since Noah’s time, according to Genesis). But the chances of them occurring nowadays seem to be increasing. Global warming is increasingly getting the blame.

But is the globe really warming? Many people sitting around their firesides in the northern hemisphere this winter find it hard to believe. Some think it feels more like another ice age on the way.

Part of the bewilderment lies in a misunderstanding of the words ‘weather’ and ‘climate.’ The difference is that ‘weather’ is defined as atmospheric conditions over a short period of time, whereas ‘climate’ refers to conditions over relatively long stretches – months, years, decades or more.

Presenters on Fox News, famous for denying the existence of global warming, predictably used the recent deep freeze in the US to mock the scientific evidence on climate change.

Donald Trump went further and used the stranding of a Russian research ship in ice in Antarctica as another reason to demand in a tweet: “this very expensive global warming bullshit has got to stop.”

The great majority of climatologists believe that weather patterns and trends (rather than individual events) suggest the planet is indeed getting warmer, that carbon dioxide emissions are compounding the situation and that to deny this could have dire repercussions.

Portugal is currently among the world leaders in the annual Climate Change Performance Index. Along with Denmark it relies for its electricity on renewable sources more than other countries in the EU. While little Portugal is doing its bit, China and the other big offenders need to do much more if CO2 emissions are to be reduced from the 2012 record level of 34.5 billion tones.

Within Europe, Portugal and the Mediterranean countries are thought to be the most vulnerable to climate change. With or without stringent controls on CO2 emissions, the long-range forecast is for less rainfall, more heat-waves and droughts. Sea levels are expected to rise significantly, placing much of the coastline at risk before the end of the century.

All this could severely affect such things as food production and the tourist industry. Desertification could make the landscapes in southern Portugal more like those in northern Africa.

More clarity about what is going on could be just around the corner. Researchers and policy-makers will be attending a three-day international conference in Lisbon 10-12 March. The objective, say the organizers, Circle-2: “To share the results of 10 years of co-operation in climate change impacts, vulnerability and adaptation research and pave the way for the development of new research in support of climate change adaptation in Europe in the next decade.”