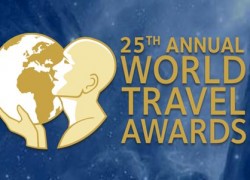 In a statement, the Secretary of State for Tourism, Ana Mendes Godinho, said it was “extremely proud to receive this distinction again.”

At the awards ceremony, which took place for the first time on national territory, Portugal was distinguished with 16 prizes, a record, after the seven trophies of 2017 and four of 2016. In June 2018, Portugal was re-elected as Europe’s Best Tourist Destination.

The evening marked the climax of the World Travel Awards 25th anniversary and the Grand Tour 2018 – an annual search for the finest travel and tourism organizations in the world. Hundreds of the leading travel industries figureheads from across the globe attended the ceremony

Created in 1993, the World Travel Awards recognize the work developed in the area of ​​the tourist industry at a global level, in order to stimulate the competitiveness and quality of tourism, and the selection of the nominees is carried out annually on a worldwide scale by the general public and for more of 200 thousand tourism professionals from 160 countries. World Travel Awards ceremonies are widely regarded as the best networking opportunities in the travel industry attended by government and industry leaders, luminaries and international print and broadcast media.