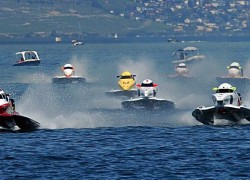 The waterfront of Porto city’s River Douro is staging the Round 3 of the F1H2O World Championship Grand Prix boat racing.

The competition, gathering the world’s fastest boats, will take place on the weekend of  July 31 – August 2 , with the first day dedicated to training and the second day to competition.

The catamaran-shaped Formula1 powerboats can reach vertiginous speeds – between 230 km and 240 km – faster than even the most state-of-the-art Formula 1 cars. They are capable of going from standstill to 160 km per hour in only 4 seconds.

This international competition is similar to Formula1 for cars and similar rules apply. Across the world, teams of different nationalities compete in the Grand Prix, which is regulated by the Union Internationale Motonautique (UIM).

Established in 1985, the F1H2O World Championship is one of the longest running and most successful and professionally managed series in world powerboat racing attracting 20 of the world’s leading drivers and 10 teams from 15 countries.

Races are organized at selected locations around the world based on the water conditions, infrastructures, public access, local hotels amenities and telecommunication facilities