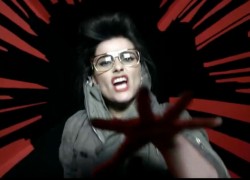 Portuguese Canadian singer-songwriter Nelly Furtado, 33,  is launching her new video and  single “The Spirit Indestructible”  featuring the hit song “Big Hoops (Bigger the Better)” considered to be different from everything else she has produced in the last 12 years.

The album is being released six years since the singer launched her multi-platinium Loose.

The video directed by “X” was shot in downtown Los, where Furtado towers up over the buildings as the song progresses to a climax.

Furtado, who is the producer of her own records, has included on her video a performance by World Champion Native Americans hoop dancers. The new album is set for release on June 19 by Interscope Records.

Nelly, who  has roots on São Miguel island, Azores, is working on a full-length Portuguese album as a follow up to her Spanish production, Mi Plan, for which she was  awarded the Latin Grammy for Best Female Pop Vocal Album.

According to Furtado, one of the tracks on her last album, entitled Waiting For The Night, was inspired by a vacation in Portugal when she was 16 years.

Furtado will be performing on the Billboard Music Awards live on ABC, May 20, as she plans the kick off tour to promote her new album.