Crime: The Madeleine McCann case and the media – By Len Port 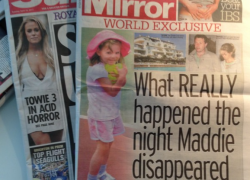 The most reported and discussed missing person case ever recorded is still not only a highly contentious mystery, but also a personal tragedy that has been turned into a public farce by elements of the media.

In the entirely predictable press frenzy surrounding the imminent 10th anniversary of the disappearance, much of the coverage, particularly in the British tabloids, has been farcical. But it should not be dismissed lightly.

Unable to come up with “news” on the case, the tabloids have been rehashing the same old speculation and guesswork.

“Could Madeleine McCann have been snatched by a lone paedo or simply wandered off?….”

And then there was the much-touted Australian TV show that promised “a major breakthrough in the case”.

The story did not explain what “really” happened, nor did it name the nanny or why she had remained silent for so long.

It quoted her as considering the McCann to be “the picture perfect family” and repeated the usual British criticism of the Portuguese police.

More surprisingly, she claimed that the resort from which Madeleine vanished was considered so unsafe that nannies were given rape alarms (whistles) and advised, “don’t go anywhere by yourself, ever”.

There was nothing to suggest the Mirror had tried to question or check this or any of the nanny’s other assertions, but, in Praia da Luz, they were viewed with derision. It was seen as yet another attempt to brand Praia da Luz as a den of iniquity, which it is not and never has been.

The official police files on the case contain nothing about rape whistles or alarms. None of the signed statements by child-care workers mentioned anything about suspicious goings-on or Luz being “unsafe”.

The manager of the Ocean Club where the McCanns were staying said in a police statement in 2007 that he had “no knowledge of any untoward situation involving Ocean Club users or in the village itself, other than some damage and minor thefts”.

The Mirror story was also a reminder that real journalism has to a large extent been replaced by ‘churnalism’, which disregards traditional standards of original news gathering based on impartiality and fact-checking for accuracy and honesty.

The nanny’s story was quickly recycled virtually verbatim on the Internet by other tabloids. Even the broadsheet Daily Telegraph fell into line as did news services in the United States, Australia and New Zealand.

Trial by the media has had a huge influence on public perceptions about guilt or innocence in this case. Most of the mainstream media reports state as if it were a fact that Madeleine was “abducted”. Maybe she was. Maybe she wasn’t. There is no certainty either about the other main theory that her parents covered up an accidental death in the apartment.

Until solid evidence is found and the culprits are brought to justice, the public fascination with this case will continue to fuel and be fuelled by the media’s determination to churn out stories whose accuracy and agenda may sometimes be open to doubt.

The current avalanche of stories inevitably evokes the previous admission by Lord Bell, founder and former chairman of the Bell Pottinger public relations group, to columnist and author Owen Jones that “the McCanns paid me £50,000 in fees to keep them on the front page of every single newspaper for a year, which we did”.

Nevertheless, “Maddie” helps circulation figures and makes money. Money, along with misinformation, has always played far too big a part in this case which – let’s remember – is about the tragic loss of a child.