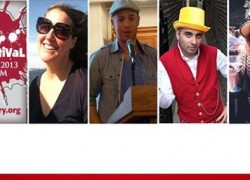 A group of Portuguese-American writers will participate Saturday, May 4, in the 2013 Salem Poetry Festival, in Massachusetts.

Readers include Nancy Vieira Couto, Brian Sousa, Millicent Borges Accardi and Carlo Matos. More than 100 poets will engage with thousands of people at the festival.

Associated with the reading series “Kale Soup for the Soul,” the  group will read poems, stories and memoirs about family, food and Portuguese culture. The readings will take place from 12:15 to 1:15 p.m. at the PEM Japanese Gallery.

In 2012, the reading series Kale Soup for the Soul premiered at the Chicago Cultural Center in downtown Chicago as an offsite event during the Associated Writing Programs and Writers annual conference

The Salem Poetry Festival will take place in Salem, Massachusetts, from May 3 to May 5. The festival offers workshops, panels, readings, letterpress and screen printing demonstrations, and a book fair featuring small presses and literary magazines.