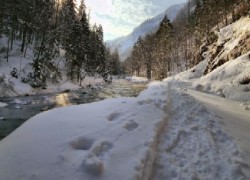 The maker of such widely beloved poems as “After Apple-Picking,” “The Death of the Hired Man,” “Stopping by Woods on a Snowy Winter Evening,” and “Home Burial,” to name only a few out of dozens, Robert Frost was born on March 26, 1874. He is also remembered for his wonderfully dramatic reading of his poem, “The Gift Outright,” at the inauguration of President John F. Kennedy in 1961. The following poem, offered in celebration of the 140th anniversary of the poet’s birth date, is by George Monteiro, the author of Robert Frost and the New England Renaissance and (forthcoming) Robert Frost’s New England Georgics.

Once, in the midst of a gig for pay, the poet
Frost stopped himself and said something like

enough for me that he thought it needed fixing.
He didn’t say that the lapse marred the poem or

choose to rationalize away the defect (after all,
the poem had made its way rather successfully

until then and most of us would’ve been perfectly
happy to have him go silent, carry on as though

nothing was wrong). Maybe it was just that Frost
wanted everyone to know that he knew there was

something wrong here (something else that had gone
unnoticed by his readers). It made him happy, this

discovery, this making public his intent to make it
right. Thus the actions of the poet who reveled in

his truth that the road not taken was the road taken. 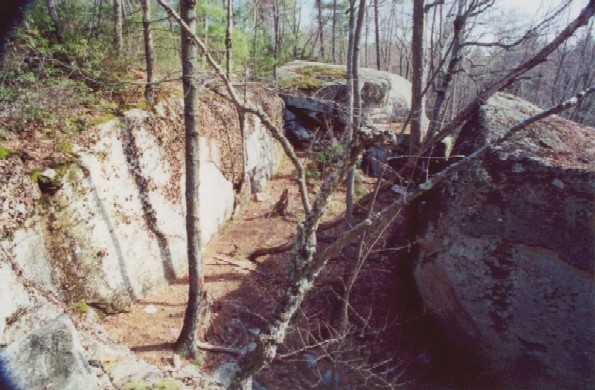 The Pigpen, a natural rock enclosure on the Robert Frost Trail (Massachusetts).

George Monteiro, professor emeritus of English and of Portuguese and Brazilian Studies at Brown University, is the author or editor of books on Henry James, Henry Adams, Robert Frost, Stephen Crane, Emily Dickinson, Fernando Pessoa, and Luis de Camões, among others. He served as Fulbright lecturer in American Literature in Brazil–São Paulo and Bahia–Ecuador and Argentina; and as Visiting Professor in UFMG in Belo Horizonte. In 2007 he served as Helio and Amelia Pedroso / Luso-American Foundation Professor of Portuguese, University of Massachusetts Dartmouth. Among his recent books are Stephen Crane’s Blue Badge of Courage, Fernando Pessoa and Nineteenth-Century Anglo-American Literature, The Presence of Pessoa, The Presence of Camões, Conversations with Elizabeth Bishop, Critical Essays on Ernest Hemingway’s A Farewell to Arms, Fernando Pessoa and Nineteen-Century Anglo-American Literature and Elizabeth Bishop in Brazil and After: A poetic Career Transformed. Among his translations are Iberian Poems by Miguel Torga, A Man Smiles at Death with Half a Face by José Rodrigues Miguéis, Self-Analysis and Thirty Other Poems by Fernando Pessoa, and In Crete, with the Minotaur, and Other Poems by Jorge de Sena.  He has also published two collections of poems, The Coffee Exchange and Double Weaver’s Knot. More…