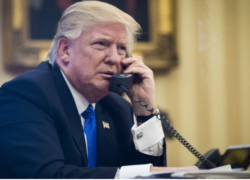 The President of Portugal, Marcelo Rebelo de Sousa, received a phone call this Friday, from President Donald Trump, praising the Portuguese government performance in battling the COVID19 epidemic, the office of the Portuguese President reported.

During the call, President Trump congratulated Portugal and offered “all the useful help necessary and considered useful.”

Bilateral issues of economic nature and the international situation, “were also addressed in a very amiable manner,” the report said.

The two presidents also shared the progression of the COVID19 pandemic and the way the disease has been dealt with as it has been spreading in both countries.

The office of President Rebello de Sousa also reported that the conversation highlighted the role of “international cooperation and the multilateral context of international organizations to face common challenges,” including “the priority in fighting the pandemic and the importance of lessons learned.”

President Trump also praised the “participation of a Portuguese company” in scientific tests that are being carried out for the production of “a specific medicine”, without mentioning which company or which medicine. Yet, last Wednesday, President Marcelo  de de Sousa received in audience  the executive president of Bial, António Portela, precisely following the approval by the regulator of the North American pharmaceutical market of a drug for Parkinson’s disease produced by the Portuguese pharmaceutical company.*

Portugal has received international praise for the manner the country has addressed the COVID19 pandemic. In the end, both presidents wished the best for the people who elected them.

Starting on May 4, the three-phase plan will open up different sectors of the economy every 15 days, starting with small neighborhoods shops, hairdressers, car dealerships and bookshops.

“We know this process has risks,” Costa told the press. “We know that as we open up various activities, the risk of transmission will increase,” he warned.

Portugal has reported 25,045 confirmed cases of the new coronavirus and 1,007 deaths, a comparatively low toll. The country declared a state of emergency on March 18 when the death toll was just two, with around 642 confirmed cases. Portugal has conducted 370,000 coronavirus tests since March 1, one of the highest testing rates worldwide

In just two months, the COVID19 killed over 64,000 people in the United States. The pandemic has already infected more than three million people worldwide, affecting the world economies.

Follow the evolution of COVID’19 in Portugal, in real time, here.