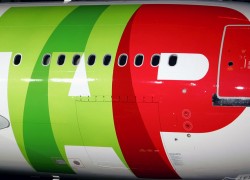 Demanding a national referendum, “as to whether the Portuguese citizenry agree with the privatization,” the petition stated that “TAP employees, Portugal and other concerned citizens undersigned,  publicly express their total disagreement with the privatization of TAP Portugal SGPS, as  announced last 13th of November 201.”

Last month, the Portuguese administration announced new plans to sell up to 66% of the national air carrier, after a failed attempt in 2012. According to government sources, the re-launching of the airline’s privatization should occur before the end of 2014.

The Portuguese government “would sell up to 66% of the company—61% through direct sales to one or more investors and the rest to its 7,500 employees.” Portugal’s Transport Secretary, Sergio Monteiro, said.

Undersigned by over 5,000, the petition followed a succession of strike actions resulting in the cancellation of over 700 flights. Discontent at poor working conditions and the government’s privatization plans were cited by union representatives as the reasons to strike.  The petition stated subscribers’ intent to “publicly manifest their total disagreement in relation to TAP privatization.”

Over the current year, TAP Air Portugal reportedly lost around €25 million (about $31 million) due to stoppages by pilots, cabin crew and airport service staff. Last year TAP’s income rose 42% to €34 million and carried about 10.7 million passengers.TAP employs over 12,000 workers.

The privatization policy of Portugal’s public assets is part of the of the €78 billion financial bailout signed by Portugal in 2011 with the European Commission, the International Monetary Fund and the European Central Bank.