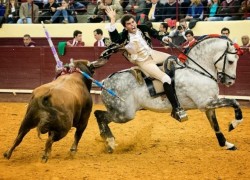 Portuguese lawmakers rejected a bill banning bullfights, submited by PAN, the People-Animals-Nature party. The bill was rejected by all major parties with few abstentions.

During the debate, Deputy André Silva of the PAN, a party represented by a single deputy, defended that bullfighting is execrable fun, based on torture, “consisting in showing the most abject cowardice that the human species is capable of.”

“Portugal continues to be a country that largely ignores the interests of animals, which summons us all to the rejection of bullfighting spectacles and, consequently, justifies the present bill,” read the PAN proposal.

The bill objectives included abolishing bullfights, revoking all laws that go against that principle; publish the law with immediate effect.

The Prótoiro Association, representing bullfighting aficionados, accused PAN of a “desperate attempt to gain visibility” and create “media folklore” with “demagogic and antidemocratic” intentions.  They say that they have a constitutional right to cultural entertainment and that bullfighting has a long history in Portugal.

For André Silva, it makes no sense and is unacceptable that public funds go into bullfighting, a spectacle disguised as a cultural activity. PAN estimates that between €16 million and €20 million a year of public subsidies are directed to bullfighting activities, including live transmission of major bullfights by RTP the public television broadcaster. 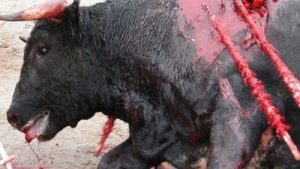 In the Portuguese style of the practice, the bulls are poked with barbs, and taunted by a horse mounted toureiro and grabbed by the so called forcados. In the end, although bulls are not killed in the ring, they are slaughtered.

Though bullfighting events occasionally draw protesters, there is no outpouring of public opinion supporting the ban. Yet, a recent nationwide survey (2007,) by Lisbon University, revealed that 56.1 % of participants were in favor of a legal ban on bullfightings.