Parliament: Pets allowed in restaurants and other commercial establishments – Portugal 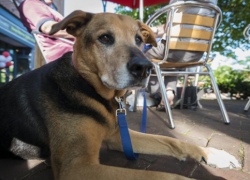 The Portuguese Parliament has approved unanimously a new law permitting pets to accompany their owners into commercial establishments, including shops and restaurants.

Effective in May, the law allows pets to enter commercial spaces, properly marked as pet-friendly, when accompanied by their owners. The law requires that pets must be secured with a short leash and not allowed to move freely.

Owners of pet-friendly spaces are permitted to limit the numbers of pets allowed in the premises with the option to provide specific reserved areas where pets can move freely. Pets are not allowed in food preparation areas

The law, sponsored by the People-Animal-Nature (PAN) party and supported by the Green party and the Socialist party, does not specify which pets are allowed.

Establishment owners will have to make their own decisions on which pets are welcome. However, guide dogs and assistance dogs must be admitted in all establishments.

In 2014 the Portuguese Parliament had approved a law stating that the mistreatment or abandonment of pets is a crime punishable with hefty fines and/or prison sentences.

Under the law “anyone who, without reasonable cause, inflicts pain, suffering or any other physical harm to a companion animal is punishable with imprisonment up to one year or the equivalent of up to 120 days’ fine.”

In the event of abandonment the crime is punished with “prison sentences of up to six months or 120 days’ fine”, and, should the neglect result in the death of a pet, “the loss of an important organ or limb or serious and permanent impediment of its ability to walk, the offender shall be punished with imprisonment up to two years or a fine of up to 240 days.”

Changes have also been made regarding abuse to pets not owned. “Whoever attacks or kills an animal shall be obliged to compensate the owner or the individuals or entities that came to its aid for the expenses they incurred in their treatment,” says the law.

The law also stipulates that owners “must ensure the welfare of their animals”, meaning feeding them properly, and providing veterinary care. Jail terms up to three years or fines also await people who steal or “illegitimately own” animals.

Similar animal rights legislation is already in force in most European Union countries. The concept is that animals are not to be treated as ‘things’ and must have their own distinct legal status. It recognizes animals as living beings with feelings and the right to legal protection similar to children.

Married couples who separate will have to reach an agreement regarding the custody of any pets. The law states that animals should be “entrusted to one or both spouses, taking into account, in particular, the interests of each of the spouses and children and also the welfare of the animal”.

Austria was the first country to approve a legal status for animals in 1988, followed by France, Switzerland, New Zealand and Germany among others.