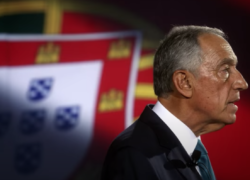 This Saturday, Portugal has confirmed 470 deaths associated with the COVID19 pandemic, with 15,987 infected, according to official sources.

The state of emergency was extended by another 15 days, to end April 17, as more measures to restrict movements were implemented, including during the Easter holiday weekend.

Except for health reasons or imperative urgency, people will not be allowed to travel outside their municipality during the holiday. Gatherings of more than five people are banned, except for large families.

Prime Minister Antonio Costa has said that restrictive measures could be in place for months as the country approaches an expected plateau of coronavirus cases by the end of May.

“It would be a wrong signal for the country to lift the state of emergency,” the Prime Minister said.

The President also said he is proposing extending a national lockdown until May 1.

The state of emergency has been in force in Portugal since March 19. According to the Portuguese Constitution, it cannot last longer than 15 days.

As part of the effort to contain the COVID19 spreading, the government is also closing all airports to commercial flights and banning domestic travel until April 13, except for State, cargo or humanitarian flights, repatriating citizens or transporting goods.

“The virus doesn’t travel by itself,” the Prime Minister told reporters. “This Easter period is a particularly critical time and that’s why it is essential to restrict movement in the national territory.”

The Regional Health Authority of the Azores informed on Saturday that a total of 85 positive COVID19 have been detected in the Region, with 3 recovered cases, 3 deaths, and 79 active cases. São Miguel (45), Terceira (8), Graciosa (4), São Jorge (7)  Pico (10) and Faial (5). No new cases were detected the last 24 hours this Saturday.

Madeira has not detected new cases of COVID19 in the last three days.

The Portuguese Parliament has approved partial pardons to those facing two-year prison sentences or those who only have two years left behind bars. Prisoners who committed violent crimes will not be pardoned.

Prisoners given sentences longer than six months, who have served a quarter of their time, normally allowed 3 days leave, will be granted 45 days. About 2,000 prisoners to be released will be required to stay home.

Those convicted of homicide, sexual violence, physical abuse, or association with criminal networks will remain in prison, as well as anyone who committed a crime while in public office, from politicians to police officers.

Parliament has also approved the suspension of rents struggling households and small firms.  The measure suspends rents until a month after the state of emergency ends.

Renters are expected to repay what they owe in monthly installments for up to a year. Parliament also suspended electricity, water and gas payments and shutoffs.

Portuguese fruit growers will be compensated at 40% of the market price if they donate their crops to charity. The measure includes those unable to sell their produce.

The European Commission just approved a series of grants and loan guarantees to support Portugal, Greece, and Poland to soften the economic impact of the COVID19 pandemic.

Portugal’s government and the Portuguese Central Bank have predicted a recession and a rise in unemployment in 2020 as result of the COVID19 pandemic. A quarter of the Portuguese population gets only €635 euros a month, the lowest minimum wage in Western Europe.

The COVID19 pandemic has already killed at least 107,064 people worldwide, with about 1,700,000 cases of infection officially diagnosed in 193 countries and territories. The United States have reported 533,259, as of Saturday, April 11th, of which 31,3917 have recovered, and 20,597 have died, surpassing all countries worldwide. According to the US official model, about 61,000 Americans will lose their lives to the pandemic by August 2020.