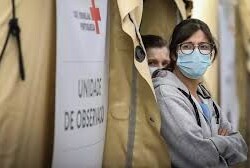 President Marcelo Rebelo de Sousa is expected to declare a State of Emergency on Wednesday to further decree measures to fight the fast-moving COVID19 pandemic.

The move, which follows the declaration of a State of Alert last week, would suspend and/or restrict some constitutional rights and liberties, including the right to free movement.

The situation in the country is worsening by the hour and numbers are going up on a daily basis.

According to the Directorate-General for Health (DGS) 448 cases of COVID19 infection were confirmed on Tuesday, an additional 117 cases in the past 24 hours, with a 35% increase in the number of cases.

The first death was also confirmed. Mário Veríssimo, 80, who suffered from lung disease, is the first COVID9’s victim. He died on Monday at the Santa Maria Hospital in Lisbon. Three patients have been cured and five Portuguese abroad were reported having tested positive for the COVID19.

Since the beginning of the epidemic, 206 patients have been admitted to hospital, with 17 in critical condition. There are 4,030 suspected cases and 6,852 are under surveillance by health authorities. There are currently 19 active community transmission hotspots.

A meeting with the President and the Council of State is scheduled for the early hours of Wednesday morning, in time to deliberate and pronounce the State of Emergency that same day.

As the pandemic quickly expands in Portuguese territory, the Minister of Health, Marta Temido, has said the country has moved from the contention stage to the “exponential growth phase of the epidemic,” aligned with what other European countries are currently facing.

The Azores e Madeira have confirmed one COVID19 case each. Both Autonomous Regions are imposing quarantine on all travelers on arrival.

The Regional Health Authority announced that “all passengers on flights from abroad who land in the region” would be “obliged to comply with a mandatory 14-day quarantine period.”

In a letter sent to Portugal’s Prime Minister, the President of the Regional Government of the Azores, Vasco Cordeiro, requested “the urgent suspension of air connections from abroad, including from the national territory, with airports in the Azores, with the exception of cargo transport and cases of force majeure, as long as authorized by the competent Health Authority.”

In a statement the Regional Government stated, “all passengers on foreign flights that land in the Region are obliged to comply with a mandatory quarantine period of 14 days, determined by the Regional Health Authority.”

In Madeira, the President of the Regional Government, Miguel Albuquerque, has also requested from Portugal’s Prime Minister the shutdown of all airports in the region as a measure to protect the health of the people on the islands. Meanwhile, all travelers arriving at the airports of Madeira and Porto Santo are mandated to self-quarantine for 14 days.

Portugal’s Prime Minister, Antonio Costa, revealed that the whole country has only 2,000 beds reserved for people affected by COVID19.  Of these beds, 300 are provided for intensive care. He also said that the National Health Service has the capacity to expand the availability of beds through the reorganization of services.

The Prime Minister has also announced all schools to be shut down. Workers who have to stay at home ,to care for school children of up to 12 years of age, will receive 66% of their base salaries, he said.

Cruise ships will not be allowed to disembark passengers at the country’s docks, except for those who have Portuguese nationals on board.

Night clubs will also be closed and capacity restrictions on entry to shopping malls and restaurants are to come into force. Social events held in close spaces have also been restricted or prohibited.

According to the Independent Doctors’ Union, there were more than 50 doctors infected and more than 150 were quarantined. Also, the union has called on the Government to provide better means of protection for health professionals. All medical consultations and non-urgent procedures were canceled.

Following the measures established by the Government for public services, banks are limiting the entry of customers in their branches to the number of employees available to serve them. Customers are being directed to use digital means of communication.

Portugal’s tourism industry is feeling the impact of the COVID19 epidemic, with hotels reporting cancellations and employers across Portugal fearing the worst is yet to come.

Dependent on tourism, Portugal has attracted more than 16.3 million foreign visitors last year, up from about 10 million in 2014, when the economy slowly started to recover from the country’s debt crisis. The sector contributed 14.6% to gross domestic product in 2018, according to latest official data.

“Tourism is resistant to many things but not viruses … A tourism slowdown means a severe slowdown in our economic growth,” AHP chief Cristina Siza Vieira told Reuters, explaining that the most profitable summer months were the biggest concern as overall bookings were slowing sharply.

Portugal’s flag carrier TAP has suspended over 3,500 flights scheduled between this month and May.

PAJ.Staff. This fast developing story will be updated.