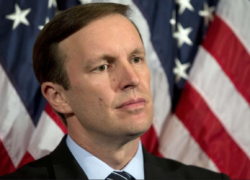 The Portuguese Leadership Council of the United States  (PALCUS) has announced that Senator Chris Murphy, Democrat of Connecticut, is the newest member of the “Friends of Portugal” in the U.S. Senate.

This is an important accomplishment because Connecticut has more than 49,000 Portuguese according to the last American Community Survey, and ranks in the Top 10 States with the most Portuguese, according to PALCUS newsletter.

Friends of Portugal was created to serve as the parallel body of supporters of Portuguese-American issues in the U.S. Senate. It is co-chaired by Senator Patrick Toomey (R-PA) (of Portuguese descent) and Senator Jack Reed (D-RI).

PALCUS is working to expand the Friends membership to all states where there is a Portuguese presence, the news letter has stated.