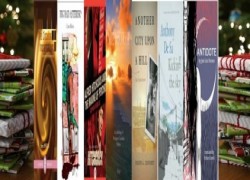 In 2013, many fine books were published either about or by those of Portuguese heritage and the Portuguese American Journal featured a number of book reviews, interviews and literary articles.

This holiday season, as contributor to PAJ, it only seems appropriate that I should present my recommended Christmas Gift List, featuring poetry, fiction, non-fiction and other media by and about Portuguese American writers in English.

The list below is by no means comprehensive; however, it does feature recent books (2012-2013) and selected media–all of which are available online and in stores for you to consider when shopping for the holidays. Many of these selections were reviewed in PAJ.

A title for everyone on your gift list, from the poet to the historian to your Portuguese Avós.

Remember, when you “gift” these items, you’ll not only be thanking writers and artists for their important creative work, you’ll also help expand our community by putting books in the hands of potential new friends, scholars, students and readers.

Another City Upon a Hill by Joseph Conforti 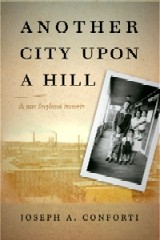 A searching portrait of a city battered by the collapse of the textile industry woven into a spirited coming of age story. This gripping memoir is both a personal story and a portrait of a distinctive New England place—Fall River, Massachusetts, once the cotton cloth capital of America. Growing up, Joseph Conforti’s world was defined by rolling hills and granite mills, and forests of triple-deckers. Conforti, whose mother was Portuguese and father was Italian, recounts how he negotiated those identities in a city where ethnic heritage mattered. Paralleling this personal account, Conforti shares his family’s story of three generations of Portuguese and Italians making their way in a once mighty textile city. Another City Upon a Hill by Joseph Conforti, Tagus Press 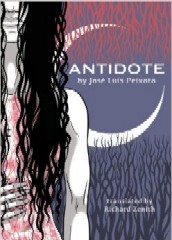 This book will break your heart. Strong, emotional tales, fables and warnings of bad dreams come true. The first story, “Inside and Above People,” written in second person, addresses a universal “you,” setting the tone for the collection with a chilling promise. Peixoto writes, “We flow like blood inside bodies whenever they are pulled down and swallowed by chasms.” And continues with an eerie threat, “. . . we can destroy what you think is surest. You’re within our reach. We can touch you if we want. We can destroy you.” (Millicent Borges Accardi, book review) Read also: Interview with José Luis Peixoto, by Kathi Stafford. 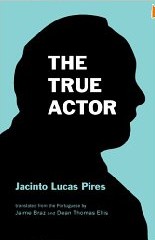 Politically conscious, cinematic, and everything else that is characteristic of the literature of Lucas Pires, all absorbed into and shaken out in a game of conscience in which he holds all the cards. And this book is his royal flush. (TimeOut Lisbon)

The favored prostitute of Lisbon’s rich and powerful has been found dead amid austerity protests in Portugal, and down-on-his-luck actor Americo Abril, who has just won the role of a lifetime playing Paul Giamatti in the avant-garde film Being Paul Giamatti, is the prime suspect. (Amazon).

Home is an Island by Alfred Lewis 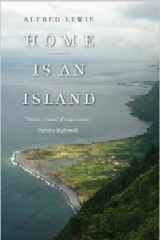 Originally published by Random House in 1951, Home Is an Island is an autobiographical novel about boyhood on the Azores during the early twentieth century. Set in the mid-Atlantic, halfway between Portugal and the United States, the book captures the simple, pastoral life in a village of the Old World where the popular imagination is permeated by the wonders of America and its promise of wealth and opportunity. This book will appeal to readers interested in America in the literary imagination, island literature, Portuguese-American literature, and Diaspora studies.
Home is an Island by Alfred Lewis, Tagus Press (2012)

It was 1977 when a shoeshine boy, Emanuel Jacques, was brutally raped and murdered in Toronto. In the aftermath of the crime, Antonio Rebelo, the twelve-year-old narrator of this story, explores his Portuguese neighborhood’s dark garages and labyrinthine back alleys, along with his rapscallion friends. The boys develop a curious relationship with a charismatic, modern-day Fagin, a fledgling master over an amoral world of young hustlers, theft, and drugs.
As the media unravels the truth behind the shoeshine-boy murder, Antonio starts to see his family–and his neighborhood–as never before. He becomes aware of the dashed hopes of immigrants, of the influence of faith and the role of church, and of the frightening reality that no one is really taking care of him. So intent are his parents and his neighbors on keeping the old traditions alive that they act as if they still live in a small Portuguese village, not in a big city that puts their kids in the kind of danger they would not dare imagine.
Antonio learns about bravery and cowardice, life and death, and the heart’s capacity for love and for unremitting hatred in this stunning coming-of-age novel set against the backdrop of a true crime that shook an entire city.
(Amazon).
Kicking the Sky by Anthony De Sa, Doubleday Canada (2013).
Read also: Interview with Anthony De Sa by Millicent Borges Accardi. 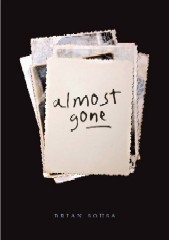 Brian Sousa leaves sentiment and saudade behind in Almost Gone, a linked collection spanning four generations of a Portuguese immigrant family. In this hardscrabble world, the youth struggle with the secrets left behind by their elders, as their parents fought through the pain and joy of assimilation. Told through various perspectives, Almost Gone is a working-class tale of survival that finds no easy answers, but cuts straight to the bone. (Amazon)
Almost Gone (Portuguese in the Americas Series) by Brian Sousa (Author), with introduction by Frank X. Gaspar, Tagus Press, (2013). Read also: Interview with Brian Sousa by Millicent Borges Accardi.

The Circular Incantation: An Exercise in Loss and Findings by Irene Marques

Call this fat poetry, not thin. . . Marques has a clear ability to turn a poem and make it her own.
(Arc: Canada’s National Poetry Magazine)
This collection is an announcement, an announcement from the crossroads, from the crosscurrents, from the multiple paths of writing and thinking, of feeling being and existence. It extends the self in all directions so that that very self can exit the chains of the individual ego and feel the larger Being that exists outside … It is between poetry, chronicle, existential and transcendental meditation (Amazon).
The Circular Incantation: An Exercise in Loss and Findings by Irene Marques, Guernica Editions (2013) 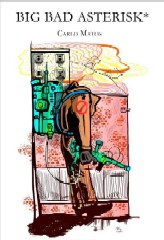 Carlo Matos, Portuguese-American writer has long been a rebel as both a professor and an MMA fighter.
Big Bad Asterisk* is a sequence of prose poems that entangles the reader in a narrative of human oddity and originality. Welcome to the family where the father uses a machete on the hedges, the great uncle is lost hunting trolls, the only way to talk to the grandfather is through the grandmother and the baby’s spoon is a bone. Beware! Once you start reading it is impossible not to find yourself tangled in this family. (Susan Yount, author of Catastrophe Theory.)
Big Bad Asterisk by Carlo Matos, BlazeVOX (2012). Read also: Interview with Carlo Matos, by Michael Colson.

This slender volume is a testament to the emergence of Portuguese Canadian literature, with more of their words and stories being brought to the attention of more people than ever before. Showcasing contemporary fiction, nonfiction and poetry in order to reflect the changing Portuguese Canadian literary community while supporting new voices in the diaspora, Memória features fifteen writers whose work illustrates a wide range of experiences, narrative voices and sensibilities (Amazon).

The Gávea-Brown Book of Portuguese-American Poetry
by Alice R. Clemente and George Monteiro 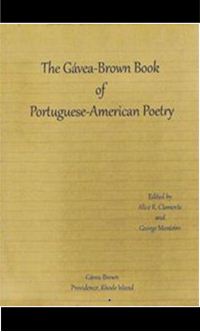 The Gávea-Brown Book of Portuguese-American Poetry, edited by Alice R. Clemente and George Monteiro, is a remarkable collection of poetic offerings. This publication brings together representative work of twenty-four fine Portuguese-American poets. The volume covers a significant span of time, beginning with the poetry of Emma Lazarus (1849-1887), and continuing through living authors who have made significant contributions to the world of literature. (Kathi Stafford for PAJ).

Note: this book is not available on Amazon.
To order, contact Gávea-Brown, Department of Portuguese and Brazilian Studies tel: (401) 863-3042 or e-mail: Armanda_Silva@Brown.edu. 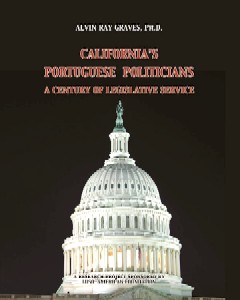 “Is it simply a matter of coincidence that the relatively small Portuguese community in California’s San Joaquin Valley is so heavily represented in Congress while New England is not?”
The author, Dr. Alvin Graves, introduces pioneer Portuguese politicians from California’s San Joaquin Valley, on their pathway to Washington DC and the National Congress.
California’s Portuguese Politicians captures the civic and legislative contribution of the Portuguese immigrant community of California to State and National legislations.
From John G. Mattos, a first-generation immigrant from the island of Faial, elected to the California State Assembly in 1900, to David Valadão, a second generation Portuguese Californian elected to the US Congress in 2012, see how Portuguese-Californian immigrants have played a significant role in American politics!

Note: this book is not available on Amazon. Click here to order and for their special holiday discounts.

Alfred Hitchcock and the Making of Psycho by Stephen Rebello 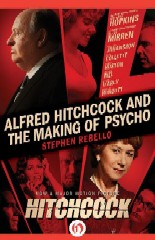 Here is the complete inside story on the making of psycho, the forerunner of all psychothrillers. Stephen Rebello (Portuguese-American writer) takes us behind the scenes at the creation of one of cinema’s boldest and most influential films. From Hitchcock’s private files and from new in-depth interviews with the stars, writers, and technical crew we get a unique and unparalleled view of the master at work.
Starting from the gruesome crimes that inspired the novel on which the film is based, he takes us through the novel’s adaptation into a screenplay and the film’s preproduction, shooting, postproduction, and ultimate reception.

Lusofonia and Its Futures is a richly textured collection of essays on the Lusophone (Portuguese-speaking) world, which comprises more than 240 million people in eight countries on four continents. The notion of Lusofonia encompasses the cultural identities generated by Portuguese speakers with shared as well as divergent histories, including fiction in translation by writers from several countries, as well as scholarly essays on such topics as the reception of the English novel in Brazilian literature and of Fernando Pessoa in Brazil (Amazon). 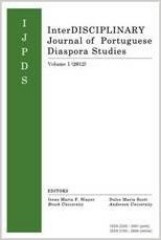 Just for Fun Other Media 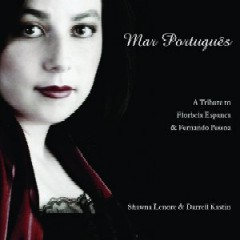 Besides the obvious, the father-daughter duo of Darrell Kastin and Shawna Lenore have a great deal in common. Kastin, a Los Angeles native, is an author of novels, short stories and poetry, as well a musician and composer. The Undiscovered Island, a novel written by Kastin, was published in 2009 while he also released a CD, Lullabies for Sinners, in 2007. Lenore shares her father’s literary and musical talents and passions. A graduate of Smith College and a singer, poet and writer, she is in the process of furthering her literary skills and credentials at the Vermont College of Fine Arts.