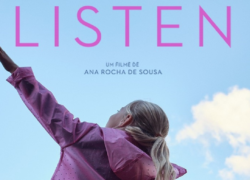 The American Film Academy has excluded the Portuguese film Listen, directed by Ana Rocha de Sousa, from the nomination for Best Foreign Film at the 2021 Oscars.

After analyzing the Portuguese submission, the American Film Academy informed that “The International Feature Film Executive Committee decided the candidacy was ineligible and requested that a new film candidacy be submitted as urgently as possible,” the Portuguese Academy of Cinema (APC) announced.

The American Film Academy has concluded that the film is mostly spoken in the English language, and, therefore, does not comply with the competition rules.

According to the APC source, “the exclusion is linked to one of the eligibility criteria that requires at least 50 percent of the participant film must be spoken in a non-English language.”

The film was the most voted among the members of APC to represent Portugal at the 93rd American Film Academy Award, scheduled for 25 April 2021, in Los Angeles.

Apparently, according to the source, the Portuguese Academy of Cinema, responsible for the submission, was not aware of the language regulations governing the American Academy of motion pictures.

The most voted among the members of APC to represent Portugal at the 93rd American Film Academy Awards, the film was entirely produced in the United Kingdom and for the most part spoken in the English language.

Listen was among the four films submitted by APC members, which also included Mosquito by João Nuno Pinto, Patrick, by Gonçalo Waddington, and Vitalina Varela by Pedro Costa.

Currently, APC has reopened a new selection process, through which its members will vote on a new Portugal produced film to submit to the 2021 Oscars competition.

Based on a true story, Listen is about Portuguese couple struggling to make ends meet, when a misunderstanding arises at school with their deaf daughter and the British social services. The narrative portrays the battle of the Portuguese immigrant parents to keep their family together.

The production was filmed on the outskirts of London with a Portuguese and English cast, led by Lúcia Moniz, Ruben Garcia and Sophia Myles.

The shortlist of the top 10 Oscars nominees by the 93rd Academy Awards will be announced in March. Listen has made his debut in the Portuguese cinemas on 21 October.

The film has won several international awards, including the Future Lion Award at the 77th Venice International Film Festival and was acknowledged with a special Orizzonti jury prize. It was also distinguished with the Bisato d’Oro Award for Best Performance, one of the parallel awards at the 77th edition of the Venice Film Festival, in Italy. The film also won the Sorriso Diverso Venezia Award.

Ana Rocha de Sousa, 42, is also a stage actress. She completed a degree in Fine Arts in Portugal before emigrating to London, where she studied cinema with Mike Leigh and completed a Master’s Degree in Directing at the London Film School.